The Westfield Young Matildas go into camp today in preparation for their AFC U19 Women’s Championship 2011 which act as the qualifiers for the FIFA U-20 Women’s World Cup 2012 to be held in Uzbekistan.

The camp, held at the Blacktown International Sports Park, runs until Sunday with Westfield Young Matildas head coach Jeff Hopkins putting the players through their paces prior to the six team round robin tournament in Vietnam next month.

The team will have one more training camp on the Gold Coast prior to their Brisbane departure on October 1.

Among the 23 players are FIFA Women’s World Cup stars Caitlin Foord and Teigen Allen who at 16 and 17 years of age respectively bring both a huge amount of talent and experience into the squad.

“I’ve learned a lot this year especially from the World Cup and Olympic qualifiers and I hope I can bring some of my experience and share it with the other girls,” said Caitlin Foord.

“It’s been a huge learning experience playing in the senior team and I think it will help me get the best out of myself at the Championships next month.

“We’ve got a really great team (the U19s) and it will be interesting to see how well we can play together as it’s been a while since we were all out on the pitch together.”

The top three sides from the AFC U-19 Women’s Championship 2011 will progress to next year’s FIFA U-20 Women’s World Cup which will be held from 18 August – 8 September 2012 in Uzbekistan. 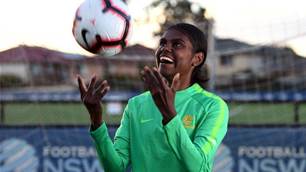