Jarmillia Murphy-Knight, who made her international debut, has made the semi-finals of the 400m after finishing the race strong.

The 18-year-old finished fourth with a personal best of 59.19 seconds and qualified as one of the six fastest non-automatic qualifiers.

Another debutant and teammate Annamaria Leszczynska was unable to hold her pace down the final 100m and finished sixth in her heat in a solid 59.94, missing out on a place in the semis.

Australian running rising star Riley Day started her Championships in fine form for the 100m with a time of 11.77 seconds to automatically qualify for the semi-finals later this afternoon.

Sprinters Riley Day and Mia Gross have an adrenaline-filled first round of the 100 metres, running 11.77 (+0.4) and 11.80 (+0.8) respectively. ‘I just wanted to go out here today and do what I could to get into the next round,’ Riley tells IAAF and Australia media. pic.twitter.com/jgHP0Dn5R6

Mia Gross placed fifth in her heat with a time of 11.80 seconds and had a nervous wait to see if she was one of the four fastest non-automatic qualifiers.

Unfortunately, she was knocked out in the final heat to miss by one spot, and just 0.03 seconds.

In the women’s 3000m Australians Amelia Mazza-Downie and Lara Crouch finished in the top 10.

Crouch and Mazza-Downie were part of the main pack with eventual gold and silver medalist Japanese duo Nozomi Tanaka and Yuna Wada.

Also on the track was Ella Connolly, who took the win in semi-final three of the 400m, in a season’s best 52.78 seconds and pipped Kenyan Mary Moraa on the line by 0.2 seconds. 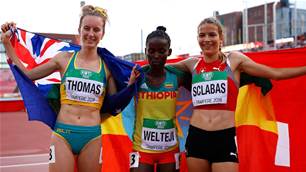