Melbourne City have locked in three of their most important and pedigreed players for Rado Vidosic's upcoming title tilt.

Japanese World Cup winner Yukari Kinga, 2016 NWSL Defender of the Year Lauren Barnes and legendary Matildas shot-stopper Lydia Williams have all re-signed with the club for the upcoming season.

“We’re delighted to welcome back a crucial group of players that have played a significant role for our Club in recent seasons,” City boss Rado Vidosic told City’s official website.

“There ability to perform at the highest level consistently alongside their individual qualities, both on and off the pitch, is what makes them so important."

Vidosic is now confident that City, who have also brought in Emily van Egmond among a raft of familiar faces for the upcoming campaign, have what it takes to once again challenge for the title.

“We’re welcoming back three individuals who have a strong winning mentality, who are fierce competitors and a group who will continue to strive towards achieving success.

“I’m very confident in this squad’s ability and believe that we are building a team that has what it takes to compete for the title this season.” 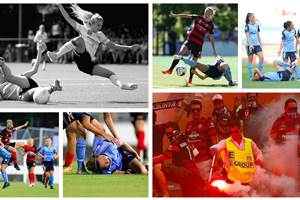