Round 5 of the WNBL has completed with Perth Lynx extending their winning streak and Sydney Flames yet to record a win.

Claiming their first win at home of the season, Melbourne set up the victory with a 13-0 run into half-time before drilling six three-pointers in the third quarter. They finished with a league-high 17 three’s on the game as Cayla George (27 points, three steals, three blocks), Steph Talbot (20 points) and Jenna O’Hea (14 points, four assists) all hit four from beyond the arc while Maddie Garrick had nine points in her 200th game.

Alex Bunton was again tireless for the Flames with 20 points and eight boards.

Securing their spot on top of the ladder, Perth hit ten three-pointers as a team to hold off an incredible performance from Kelsey Griffin (30 points, 18 rebounds- ten offensive). 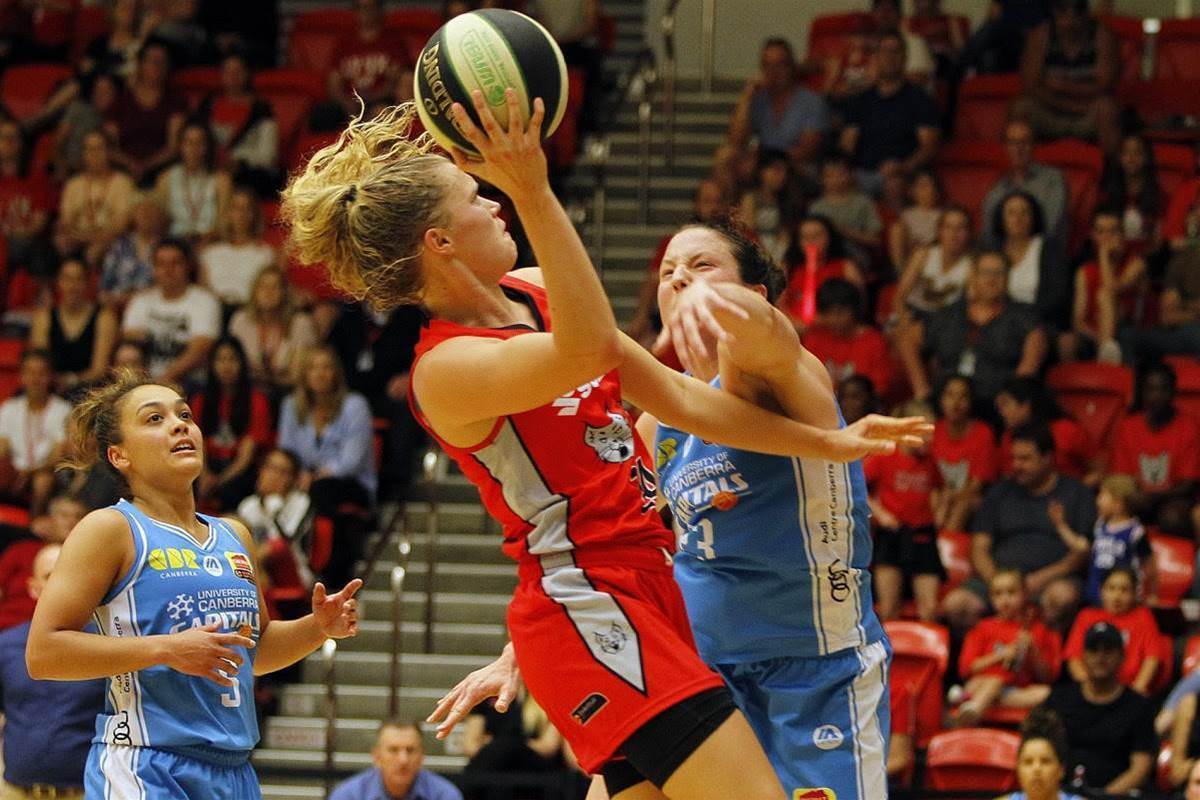 The Lightning put on an offensive clinic against Dandenong, extending their lead at every break while shooting 57% from the field overall.

Only Bec Cole (27 points) offered resistance from the visitors.

FULL TIME | Adelaide Lightning have put on a dominant display, defeating the Dandenong Rangers by 25-points. Nia Coffey led the scoring with 21-points, 7 rebounds and 2 assists, while Lauren Nicholson was impressive with 20-points, 4 rebounds and 6 assists #ReadyToStrike

The tale of both teams’ seasons was exemplified in this contest as Sydney Uni went to 0-5 in games decided by five points or less while Bendigo went to 3-1.

Alex Wilson (16 points) looked like she had done enough down the stretch for the visitors, scoring nine points in the fourth quarter and Sarah Graham (nine points) then hit a fading three-pointer with 25 seconds left to tie the scores.

Nadeen Payne (14 points) responded with the eventual game-winner though on a perfect cut to the basket before Becca Tobin (11 points, four assists, three steals) sealed the victory with an interception on the final play.

Brittany Smart paced Sydney Uni with 17 points while Belinda Snell moved into fourth on the all-time scorers list with 13 points.

Using a 22-11 final term, the Boomers stayed unbeaten on the road for the 2018/19 season while exacting revenge on the Fire in the Grand Final replay.

The victory was also Melbourne’s first in Townsville in four years as Lindsay Allen dominated with 29 points while Maddie Garrick had 17 and Sarah Boothe shot 7-7 from the field for 15 points off the bench. The reigning Champions had four players in double-figures but Suzy Batkovic played only 21 minutes with a sore neck as the Fire slumped to sixth on the ladder.

The @perthlynx, @bendigo_spirit, @uccapitals and @melbourneboomers have gained some separation in the top four at the end of Round 5 while @townsvillefire have some work to do in order to defend their Championship! #WNBL19

For the second time in a week, Sydney Uni and Bendigo will meet after just two points separted them in Round 5. Two of the hottest teams in the league will face off Friday night as Melbourne take a trip to Perth before they head home on Sunday to host Townsville in their second clash within a week as well.

That game will be broadcast live on FOX Sports Australia channel 507 and SBS Australia from 1pm AEDT.