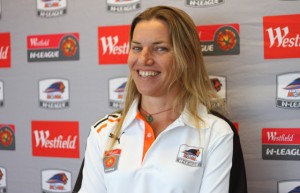 Two time W-League champions the Brisbane Roar have announced that Belinda Wilson will be the new Head Coach for the 2012/13 W-League season.

“I’m very excited – this started as a dream I didn’t think would come into fruition when the opportunity came,” said Wilson, who has spent the last three years in Norwegian football.

“It’s an awesome feeling and I’m excited to experience what’s ahead.

“I’m glad to be back in Australia to help women’s football because I think we’ve got a really bright future (in regards to) where we are headed at a national team level.

“If we can get our national competition really competitive, it will help us in international football and domestically.”

After beginning her football career with Football Northern NSW, where she was involved in elite player development, she held the responsibility of being Asian Football Confederation’s Director of Women’s Football between 2007 and 2008.

Further to that, she has also spent the past four years involved with FIFA as a Women’s Football Instructor, with AFC as Elite Coach Instructor and as Director of Coerver Coaching in Norway, where Wilson was involved with the technical development of football players.

She was also a part of FIFA’s Technical Study Group for both the past two FIFA Women’s World Cups and the 2008 Beijing Olympic Games.

All her prior roles have included both theoretical and practical work and she believes this host of experience will prove crucial as she aims for success as Head Coach of a team that has reached all four of the Westfield W-League Grand Finals to date.

“I’m always up for a challenge,” she said.

“Queensland football, and this team in particular, has always been very strong and I hope we can continue that."

“The players that are in the squad and the coaching staff we have will continue in that direction.

“We want to be in the finals and we want to continue this legacy."

“The management roles I’ve had will help me in moving the team in the right direction."

“In terms of my experience, we’ll see what happens on the pitch but I don’t think the players will question my ability.”

Her role doubles as Football Queensland’s High Performance Unit Women’s coach, where she will be actively involved in the development of the state’s best female footballers.