For all the life Australia breathes into women's sport and the inspirational stories we hear every day, there's one depressing account that's still a far too often occurrence.

In a way it's almost typical that a Western Bulldogs premiership winner, in the richest game in Australia, is the latest to choose their professional career over their sporting passion.

22-year-old midfielder Hayley Wildes, who played 15 of a possible 22 games for the Dogs and won a Premiership at the club, has chosen to retire from AFLW to focus on her budding media career at NBL club Melbourne United.

It's becoming a growing issue - depending on which side of the fence you sit on - as the growing numbers of women taking part in semi-professional sport pre-empts a growth in female participation in sports journalism, communications and the media industry.

Given the expectations of what can be a demanding, yet rewarding career, the opportunities competitions like the AFLW can offer, also hamper the progression of it's young stars.

It's a trade off that becomes essential when you consider the low wages these players compete for, yet it could also be a heartbreaking one.

"Since arriving at the Bulldogs in 2016, my professional life has changed quite drastically," Wildes told westernbulldogs.com.au.

"Although both the Western Bulldogs and Melbourne United have expressed their willingness to help me successfully complete both roles, I know there will be unavoidable schedule clashes that will inhibit my ability to give 100 per cent to both roles, which is not fair to Melbourne United, my teammates or the club."

The Western Bulldogs were expectedly understanding, calling it an "incredibly corageous decision" but in truth it was a forced one.

The Bulldogs aren't to blame, they can do relatively little outside of the greater AFLW funding structure to secure the future of their prodigious star.

Nor is this a challenge unique to AFL, nor is AFLW the biggest offender. But rather than code blaming, it's important to see the human cost in the greater issue - fit and healthy 22-year-olds should never have to retire from a game they love.

"Hayley has been a valued member of the club's women's football program since the inaugural AFLW season and we are grateful for her contribution over the past three seasons," Bulldogs women's football general manager Debbie Lee said.

"Hayley has made an incredibly courageous decision and she can be proud that she leaves as a premiership player for the club, and for the positive impact she has had within the women's football program." 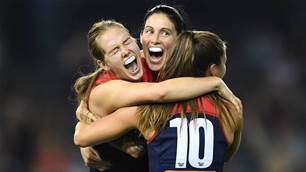