As the third installment of AFLW quickly approaches, The Women's Game is here to update you on the latest information from around the league.

Madison Smith out for Roos
North Melbourne Tasmanian Kangaroo Maddison Smith has dislocated her right patella during the first week back at training and is set to miss eight weeks of the AFLW season.

“Maddy is as tough as they come and while this is terribly disappointing for her and the team, we know that she’ll put everything into her rehab and will make a full recovery,” North head of football operations Laura Kane said.

“We hope to have Maddy back by about Round 6, all things going well."

Brannan and Blackburn named co-captains
Katie Brennan and Ellie Blackburn have been announced as co-captains of the Western Bulldogs for the 2019 season.

Voted by their peers, the duo will lead a leadership group of six including Hannah Scott, Nicole Callinan, Isabel Huntington and Kirsty Lamb.

“It’s a really exciting core group that the team has voted in as their leaders,” coach Paul Groves told westernbulldogs.com.au.

“There were two outstanding girls who, over the course of two years have really evolved and been incredible leaders for this Club.

“The strength we will receive with both Katie and Ellie working together will allow our group to continue to evolve both on and off the field.”

Blackburn captained the Bulldogs’ 2018 premiership team in the absence of Brennan, who was suspended. 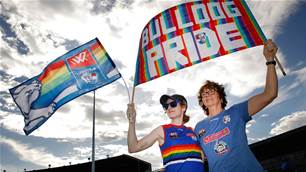 The Pride of Football