It is the business end of WBBL for 2018 and while the finals are off the tables for the Hobart Hurricanes and Melbourne Stars, six other teams have everything to play for.

Hobart’s miserable season continued with their 13 loss in 14 matches, but the Melbourne Stars showed plenty of promise as they strode to a comfortable victory.

Hobart’s innings started off with a slice of luck as Hayley Matthews was dropped on the boundary by debutant Chloe Rafferty on just the second ball.

This proved to be a costly drop as Matthews powered her way to 34 but she couldn’t capitalise on a good start and was out for her fifth score between 30 and 40.

The Stars continued their momentum with Annabel Sutherland and Georgia Elwiss combining for a brilliant relay runout to dismiss Stefanie Daffara.

Hobart’s poor running was a theme of their innings, with three run outs.

Leg spinners Beams and Alana King controlled the middle overs and didn’t allow the Hurricanes to capitalise on the momentum Matthews had created.

King’s ball to dismiss Isobel Joyce was especially impressive; she invited Joyce to dance down the wicket before beating her with drift, flight and turn as keeper Nicole Faltum quickly whipped off the bails.

Katie Mack anchored the Stars’ chase beautifully, making 42 off 44 to lead her team to victory.

Her diverse stroke play and ability to rotate the strike ensured the Stars were under no pressure early in their chase.

Hayley Matthews re-introduction to the attack brought about the downfall of Mack, but Englishwoman Georgia Elwiss and Australian veteran Erin Osborne played composed knocks to ensure there were no issues for the Stars from that point on.

Overall, the Hurricanes’ bowling never truly looked like threatening a well-executed chase and they have plenty of work to do before next season. 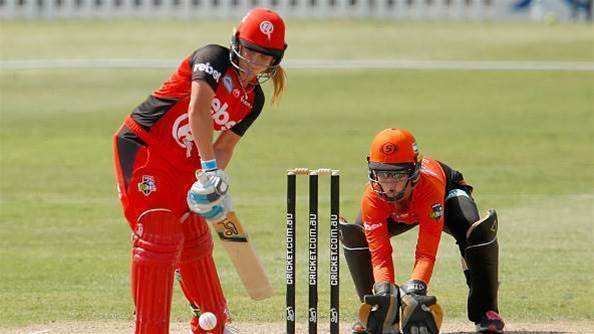 Renegades’ captain Amy Satterthwaite won the toss and surprisingly decided to bowl first, but her decision was instantly justified as her bowlers had the Scorchers at 7/64 after 12.4 overs.

Nicole Bolton threatened to break the game open early after hitting two early sixes, but Molly Strano took a safe catch off her own bowling to dismiss her and halt Perth’s momentum.

There was a bit of assistance in the wicket for the seamers early in the match and the Renegades took full toll with medium pacers Lea Tahuhu, Maitlan Brown and Hayley Jensen combining for four wickets.

The Scorchers were reeling when Lauren Ebsary and Nat Sciver came together at 5/38.

These two started to build a partnership, but when Sophie Molineux came into the attack and took two wickets in two balls any momentum Perth had gathered was gone.

At 7/64 the Scorchers were in serious trouble, but Ebsary continued to pile on the runs and led her team to a respectable total of 124.

Sophie Molineux continued her good day and got the Renegades off to the perfect start, scoring 15 runs off the first over.

She ended up with 62 off just 45 balls and the Renegades were in a commanding position when she was dismissed.

Her off side play was particularly impressive, as was her ability to dominate the particular bowlers – scoring 15 off a Bolton over and 17 off a Thamsyn Newton over.

With Molineux out, the Scorchers wrestled the momentum back through the middle overs, with Emma King, Piepa Cleary and Heather Graham bowling well and restricting the runs.

A wicket to Katherine Brunt in the second last over had the Renegades needing 9 off 8 to win, but Jess Duffin’s experience was crucial as she calmly struck two boundaries to get her team over the line.

The win kept the Renegades in the finals hunt and put pressure on the Scorchers to beat them in the rematch the following day. 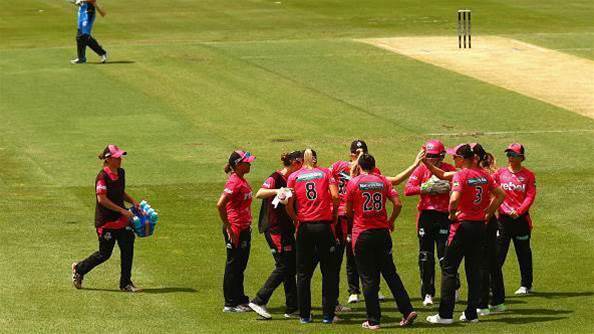 The day belonged to Alyssa Healy whose breathtaking century all but guaranteed the Sixers a "home" final.

The Strikers got off to a fantastic start, with Sophie Devine smashing her way to 70 off just 45 deliveries.

Suzie Bates offered some support from the other end, with the Strikers putting on 56 for the first wicket before Sarah Coyte took the wicket of Bates with a deceptive delivery.

Nothing could stop Devine as she continued to demolish the Sixers bowling attack - including scoring 19 off a Lauren Smith over – on her way to a half century.

Off spinner Erin Burns eventually brought about her downfall, with Ellyse Perry taking a safe catch on the boundary.

The Sixers made a comeback during the middle overs, with Sarah Coyte bowling brilliantly in her first match back from retirement, but Tahlia McGrath played a crucial knock to keep the Strikers’ innings alive as wickets fell around her.

Going into the last over, it seemed the Sixers had the upper hand, but McGrath took 13 runs off Ellyse Perry to boost the Strikers total to a commanding score of 149.

The Strikers would’ve been favourites at the change of innings, but no one told Alyssa Healy as she produced a match-winning knock.

She dominated the bowlers from the outset and took just 58 balls to bring up her century.

Amanda-Jade Wellington eventually dismissed her for 106 (her highest WBBL score), but the damage was done and the Sixers needed just nine more runs to win. 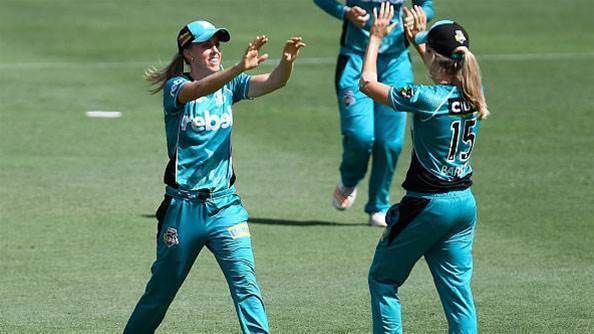 The Heat came away with a crucial win to keep their finals hopes alive.

The Thunder won the toss and elected to bat, a decision which looked good early on despite the loss of opener Rachel Priest.

Australian skipper Rachael Haynes scored freely, and Thunder skipper Alex Blackwell provided support as the Thunder got off to a solid start but the Heat didn’t have to wait long for a breakthrough as Haynes was out to a nice boundary catch from Haidee Birkett.

Blackwell continued to put pressure on Brisbane’s bowlers and was supported by Naomi Stalenberg through the middle overs.

However, they never quite upper the run rate in the manner necessary to build a massive total.

With Blackwell and Stalenberg out, Stefanie Taylor played a nice cameo at the end of the innings to take the Thunder to a respectable total of 145.

When the Heat came out to bat, Beth Mooney immediately bludgeoned the Thunder’s new ball bowlers, scoring 27 off just 16 deliveries to get the Heat off to a fast start.

The required run rate never seemed to be an issue for Brisbane who didn’t take the foot off the throttle at any stage in the run chase.

Grace Harris (57) and Delissa Kimmince (42) put on 83 for the third wicket in what proved to be a match winning partnership.

Harris’s ability to consistently find the boundary was particularly impressive, with the Thunder bowlers struggling to stop the flow of runs.