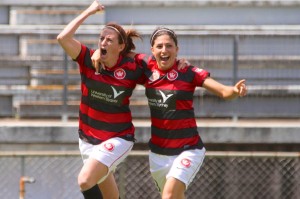 Western Sydney Wanderers have returned to form and bounced back into finals contention thanks to a powerful 3-0 victory over Perth Glory at Marconi Stadium.

A trio of returnees from long-term injury – Mackenzie Arnold, Alanna Kennedy and Heather Garriock – all played a key role as the Wanderers outlasted the Glory for their first win of the season.

Helen Petinos scored in the dying seconds of the first half, before the Wanderers turned the screws with second-half goals from Garriock and Jenna Kingsley.

Perth remained committed to the cause throughout the contest but lacked quality in the attacking third, with the ongoing absence of Westfield Matildas forward Kate Gill remaining problematic for Jamie Harnwell’s side.

The Wanderers by contrast showed an extra level of class at times in attack with Catherine Cannuli a constant menace.

The opening half was an even contest with both teams enjoying sights of goal. Most notably, Petinos and Kingsley required Glory goalkeeper Chantel Jones to make a couple of important saves.

At the other end Arnold was forced to deal with some typically well-delivered corners from Collette McCallum and Marianna Tabain, but after some earlier scares the Westfield W-League goalkeeper of the year turned in a strong performance.

The two sides seemed set to go into the half-time break level but Petinos had other ideas, with the teenage attacker converting at the far post from Jenna Kingsley’s cross for her first Westfield W-League goal.

Veteran Westfield Matildas midfielder Garriock entered the fray soon after the break and almost immediately made a stunning contribution.

Six minutes into her Westfield W-League return following a couple of years absence from the game after becoming a mother, Garriock swooped on a loose ball in the penalty area and deftly chipped goalkeeper Jones for a goal of rare quality.

The Wanderers were presenting an increasing threat to Jones’ goal and they put the game out of sight with a quarter of an hour remaining. Kingsley scored her first goal of the season - and first since returning from a serious knee injury - thanks to a cool finish at the back post following a perfect cross from substitute Michelle Carney.

Glory substitute Shannon May spurned a good opportunity by firing over, while the ever-dangerous McCallum forced Arnold into a sharp stop.

But it was the Wanderers who finished stronger and Cannuli narrowly cleared the crossbar as the home side threatened to run riot.