After a tough start to the season, a win at home was just what the Wanderers needed during the Rebel Female Football round.

Unfortunately, it was not to be for the Western Sydney side, going down to 0-1 to the Newcastle Jets.

The Wanderers came up against a confident Jets, whose high press tactics sent the black and red squad into a fluster, which ultimately lead to their undoing in round four of competition.

Although you couldn’t tell by the score line, the first half of play was action packed for both teams at Marconi Stadium, with an early foul seeing the first free kick awarded to the Jets in the very first minute.

Before the half-time whistle blew, both sides had several attempts at goal and by the time play reached its 52nd minute, four yellow cards had already been dished out, an indication of the physicality of the game.

It wasn’t until the 59th minute that the 0-0 deadlock was broken, with Katie Stengel being gifted the ball and offloading it to Jenna Kingsley who opened the scoring for Newcastle.

It was déjà vu for the Wander women who went down to Newcastle 2-1 in their only meeting last season, a game where Jenna Kingsley also scored the decider.

If it wasn’t for the staunch defending by both sides, the match could have easily been a high-scoring affair.

“During the first half, we were playing well. We were starting to build up and hold possession and just wanted to get that monkey off our backs. We hoped that by scoring that first goal, it would open the flood gates," Wanderer Erica Halloway said.

“Obviously it didn’t come off, but we’re positive about how we played in that first half,” the 34-year-old continued.

As for their game plan going forward, Halloway believes her team is on the right track, it’s just about getting those runs on the board.

“This week we focused a lot on ourselves instead of worrying about what our opponents are doing, and I think it showed in the way we played.

“We didn’t get the win, but I think we played better than we have in previous weeks, it’s just about getting that goal!” she laughed.

“We’re working hard, and everyone is trying to stay positive, but it is a tough loss,” she finished.

The Jets have now won their second consecutive game with a clean sheet and progress to third on the W-League ladder, while the Wanderers remain on zero points.

The Wanderer women will take on Melbourne Victory on Sunday December 2, where they look to break their streak of bad luck, while the Jets play Brisbane Roar on Thursday November 29, hoping to continue their climb up the table. 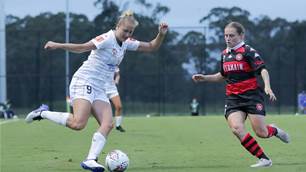 The best pics from Western Sydney Wanderers vs Newcastle Jets!