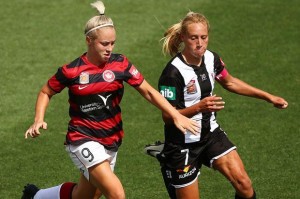 Western Sydney have made it back-to-back wins in the Westfield W-League after a 3-0 victory against Newcastle at Centrebet Stadium on Sunday.

In sweltering conditions in Sydney's west, a first-half goal to winger Linda O'Neill and Catherine Cannuli's brace after the break proved the difference between the two sides.

But there was a touch of controversy with the Jets, who have now gone 13 games without a win dating back to late last season, after they were denied what looked like a certain penalty while trailing 1-0 midway through the second half.

Wanderers defender Camille Levin appeared to barge into the back of Rhali Dobson in the box and she tried to meet a left-wing cross but the visitors' appeals for a penalty went unanswered.

Three minutes later Cannuli doubled the Wanderers' lead and the result was safe.

The victory sees the Wanderers jump up to fifth on the W-League ladder ahead of a clash with league-leaders Melbourne Victory early in the New Year.

With the match played in near 40-degree heat, both sides struggled to play with high intensity for long periods but it was the Wanderers who still dominated large chunks of possession.

They went closest to opening the scoring on 12 minutes when Levin's cross from the left evaded everyone and was headed for the corner only for Jets goalkeeper Eliza Campbell to get a finger on it to push it onto the post.

The Jets' best chance came midway through the first half when skipper Gema Simon blasted home from close range only for the goal to be ruled out for an infringement on Wanderers custodian Dimi Poulos.

It was the only real moment of concern for the home side and they continued to create opportunities at the other end.

Emily van Egmond shot straight at the goalkeeper from the edge of the box 17 minutes before the break before O'Neill squandered two chances - the second drawing a courageous save from the impressive Campbell.

But there was nothing the Jets shot-stopper could do to deny O'Neill for a third time right on half-time.

The pacy winger timed her run to perfection, racing on to Heather Garriock's through-ball, rounding Campbell and sliding into an open goal to give the Wanderers a deserved lead at the break.

It was the Jets that came out stronger in the second half but it was the home side still asking most of the questions.

Campbell again had to be quick off her line to snuff out another chance for O'Neill while Garriock's free kick sailed just over the crossbar soon after.

Dobson was terribly unlucky not to have won a penalty for Levin's clumsy challenge before the Wanderers made the most of the let-off with two more goals.

First O'Neill turned provider on 71 minutes, breaking free of the off-side trap before squaring to Cannuli who tapped into an empty net.