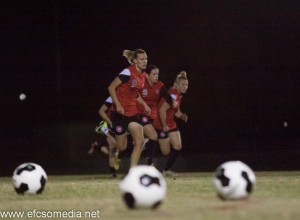 The Western Sydney Wanderers have  announced their squad for 2013/14 with Matildas vice captain the latest confirmed signing.

After spending the last two seasons with the Newcastle Jets, and a short stint with Seattle Reign in the NWSL, the 20-year-old midfielder believes that the Wanderers will be the best place to take her game forward.

“I’m really looking forward to playing with the Wanderers and the squad we have this season,” said van Egmond.

“The Wanderers offer a very competitive training environment so when I got the opportunity to come here and play I took it."

Striker Jenna Kingsley also makes a welcome return after the 21 year old completed her rehab from an ACL injury.  While American and Washington Spirit's Tori Huster commences a second season in the W-League after spending last year at the Newcastle Jets.

The Western Sydney Wanderers kick off their Westfield W-League campaign against Adelaide United on Sunday 10 November at Marconi Stadium 2pm.