Emma Checker on the radar for both Adelaide and Melbourne 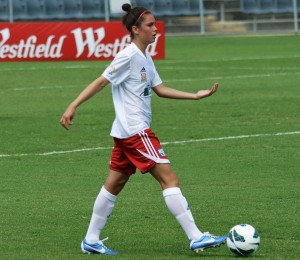 Emma Checker on the radar for both Adelaide and Melbourne

As the November 9 season kick off nears, the coaches of the W-League continue to put the pieces of their squads together.

Following on the heels of the acquisition of Melissa Barbieri, Adelaide United have announced the return of Kristy Moore and the signing of Laura Stockdale.

Moore, who joined the Lady Reds late last season as a guest player, is an experienced campaigner who has won FA Cups with Fulham, played in Norway (ending her time there as fifth on the all–time Toppserien goal scorer list) and of late in the United States with the LA Strikers.

A goal scoring midfielder, Moore was an integral part of the Strikers run to the Conference championship in the USL W-League.

“The squad is coming together well and looking like a strong side to take on the competition. I am excited to play under Ross Aloisi and see how the side can improve from previous seasons.

“I can’t wait to finally play back in my home town in front of my family and friends after all of my time away.”

The 36 year old is joined by LA Strikers teammate Laura Stockdale, originally from Sunderland, who is looking forward to her first foray into Australian football.

“It is very exciting to be on a new continent, playing in a new league. Over the past couple of years I have played with a few Australian girls who have been a part of this league and I have heard great things about it.

“I am excited about playing with the Lady Reds. The experience they are bringing in to the club this season I believe is going to bring a new look to this team and I am grateful to be a part of it. I can’t wait for the season to get underway.”

There has also been movement in relation to Perth Glory's international contingent.  Experienced goalkeeper and Chelsea FC captain Carly Telford announced that she will not returning to the club.

Telford, who suffered a broken hand in a clash with Sydney FC last season, was a crucial component of the Glory defence and is a big loss for a club with aspirations of going deeper into the finals.

Will not be returning to @PerthGloryWomen this year!Most amazing 4months with amazn people i wish them all the best for this season ????#Pswag

The good news for Perth fans is the return of central defender and former Canadian international Sasha Andrews.  30 year old  Andrews, who helped lead the Pali Blues to their third USL W-League title in six years, is a welcome returnee to the Glory side with her partnership with Kiwi Liz Milne a solid foundation for Perth's first ever finals qualification.

The Western Sydney Wanderers have maintained the services of Catherine Cannuli with the 27 year old winger committing to a return to the Wanderers for Season 6.  Cannuli is the first real news emerging from the Wanderers this season, although former Sydney FC championship captains Kyah Simon and Heather Garriock have been linked with moves to the club.  One confirmed departure is that of foundation captain Sarah Walsh with the former Matildas striker hanging up her football boots for good earlier this year.

Speaking of departures, 2 time Brisbane Roar championship goalkeeper Casey Dumont has departed the Roar for long time rivals Sydney FC.  Dumont, who has battled several injuries in the past two years, returns to W-League action this year under the tutelage of Alen Stajcic.  Stajcic looks to be stocking up his squad with current or former Young Matildas with U20 captain Chloe Logarzo, standouts Amy Harrison, Sham Khamis and Natalie Tobin all set to return for another season.

One player still to be confirmed by the club as a returnee is West Australian Samantha Kerr, although her return to the defending champions is "highly likely".  So we will take that as a yes.

Another young player in demand is South Australian Emma Checker with the teenager in a tug of war between Adelaide United and Melbourne Victory.  Already capped at senior Matildas level, the defender is well sought after by former coach Dave Edmondson with negotiations between the Victory and Checker well advanced.  Despite that, the Lady Reds still hold a slim hope of keeping Checker in her home state.

Meanwhile Lisa De Vanna is still keeping us all guessing whether which colours she will be wearing this season; purple and white or navy blue and white?  The mercurial striker is said to have made a decision but, as we do when she is streaming towards goal, we will await her move.

Or you could just tell us Lisa. We will keep it a secret...promise.