This season the The Women’s Game team has logged over 4000 minutes (of a possible 4590) watching and reporting at live W-League matches.

This season the The Women’s Game team has logged over 4000 minutes (of a possible 4590) watching and reporting at live W-League matches.

After much debate and one or two heated arguments, TWG team have finally come to a consensus for our inaugural W-League Awards. 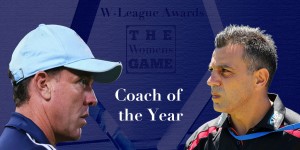 In the end the team couldn't be split as both coaches guided their teams superbly.

Almost irresistible in attack, Alen Stajcic's Sydney FC produced some of the best football of the W-League season. Their attacking brand of football netted a W-League season record 37 goals whilst still maintaining the third best defensive record. While Sydney FC were pipped at the post for the premiership, the Sky Blues were one of the 'must watch' teams with their long time coach at the helm.

Under first season coach Ross Aloisi, Adelaide United undertook a significant overhaul and with it came long craved for results.  As well as new players, Aloisi brought a culture change within the club and their highest ever season wins and ladder placing came with it.  The Reds were tougher to break down and could be swift on the counter-attack. Aloisi also unearthed some new young talent while instilling confidence in a club that had little to smile about for too long. 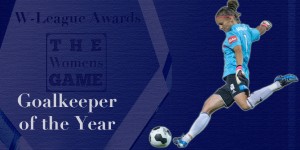 At 33 years old, a veteran of three World Cups and an Asian Cup winner, it would have been understood if Melissa Barbieri had decided to hang up the gloves after the birth of her first child.

Instead the long time Matildas custodian moved herself and her young daughter 700kms away to South Australia to join a previously floundering side.

Fitter and stronger than ever, Barbieri then put in one of her best seasons for Adelaide United. From a team that conceded 40 goals in Season Five, the Lady Reds conceded just 15, the fourth best defensive record in the league.  The improved defenders played their role but make no mistake, Barbieri's form was significant, while her leadership and football nouse was crucial for an inexperienced defence. 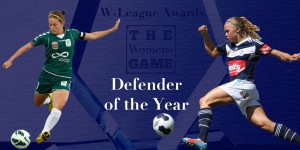 The most hotly contested and argued award, ultimately we were unable to separate centre back Ellie Brush and right full back Jessica Samuelsson with Sydney FC's Renee Rollason also running close.

With a new coach, the loss of long time centre back partner Caitlin Cooper and two young and inexperienced defenders, Ellie Brush needed all of her 50 plus match experience this season. The premiership vice captain came up against the best strikers in the league and often came out on top with her sure and solid defending.  Her consistent performances and defensive leadership went a long way to Canberra obtaining the best defensive record in the W-League. 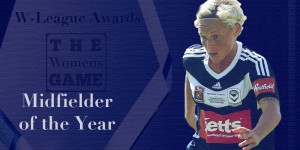 It was very hard to go by the Welsh international and Victory midfielder for this award.  Fishlock was catalyst for most of Melbourne's attacks and her combination work with Lisa De Vanna and Caitlin Friend fired the Victory into the finals and ultimately the championship.

A box-to-box midfield Fishlock has  an enormous tank but can also provide the small touches to set up her strikers or, as she did late in the season, to score herself.  Even when quiet or heavily marked the 27 year old found a way to insert herself into a match when it mattered. 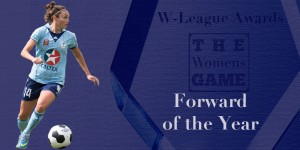 Scoring in her first match back in the W-League, English forward Jodie Taylor went on to score regularly throughout the season to canter to the Golden Boot.

That she scored 11 goals in a team where 4 other players were on the leading goalscorers list (the most of any club) demonstrates how good she was.

Taylor's pace allowed her to play as an "off the shoulder" striker but her passing and positioning also saw her set up many of her teammates as Sydney amassed a season record 37 goals. 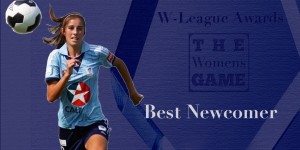 When Sydney FC were crying out for a left back, up stepped 17 year old Amy Harrison.

From the very first match against Melbourne Victory, Harrison (formerly a midfielder) morphed into the quintessential Alen Stajcic full back; quick, mobile and as much an attacking threat as a defensive stopper.

Harrison went on to play 11 of the 12 matches providing great drive on the left flank and even scoring her maiden W-League which just happened to be a match winner.Harrison's first  W-League season was rewarded with Matildas call up.

Still young and raw with plenty of scope for growth, Harrison is part of a number of youngsters who made their presence felt this season. 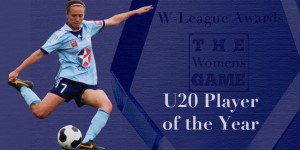 Under 20 Player of the Year: Nicola Bolger (Sydney FC)*

With the number of excellent players coming through the system, this was another hotly contested award where many players would have been deserving.

On the fringes last season, Nicola Bolger stepped up this season to be one of Sydney FC's creative midfield forces.

A neat player, Bolger is a specialist at finding the pass to play in other players but this season she found a goalscoring touch with 5 goals and providing the final ball in 3 others.

Working alongside Teresa Polias and Leena Khamis, Bolger complemented both the midfield and attack working as an outlet for her defenders and as the provider to the potent forward line. 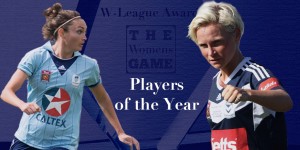 In the end it came down to Jessica Fishlock and Jodie Taylor who both led their teams in stellar seasons.

For a majority of the season Sydney FC dominated the competition with Taylor at the forefront. When the Sky Blues fell at the second last hurdle, it was Fishlock that led the charge...all the way to the Championship.