Melbourne Victory made it two Westfield W-League wins on the trot with a comfortable 3-1 away defeat of Perth Glory at nib Stadium on Sunday. 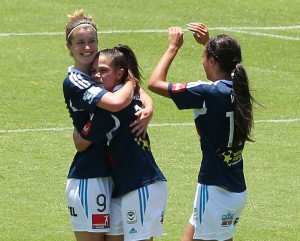 Melbourne Victory made it two Westfield W-League wins on the trot with a comfortable 3-1 away defeat of Perth Glory at nib Stadium on Sunday.

First-half goals to Jessica Fishlock and Caitlin Friend set up the win for Victory, while Lisa De Vanna heaped more pain on her former club with a third strike in the closing stages.

Canadian striker Christina Julien snatched a late consolation goal for Glory as the home side crashed to a second home loss from as many matches this season.

Welsh captain Fishlock, emerging striker Friend and midfielder Ella Barilla were among the many standout players for Victory, who now has six points from the first three rounds.

The energetic and quick-thinking Barilla twice cleared the ball from her team’s goal-line and set up two of Victory’s three goals.

Playing her first game of the season, Fishlock opened the scoring in the 24th minute with a 30m strike that beat a diving effort from Perth keeper Chantel Jones and ricocheted off the right post and into the back of the net.

Glory threatened to cancel out the early advantage at three successive corners, but Jamie Harnwell’s side was unable to beat the sturdy Victory defence.

Victory extended their lead to 2-0 in the 32nd minute when Friend scored against the run of play after pouncing on a cheeky flick from Barilla and wrong-footing Glory centre back Sasha Andrews, before effortlessly placing the ball past Jones.

Friend twice almost added to her tally in the minutes that followed, but both of her close-range volleys from open crosses went over the bar.

Glory took it up to Victory after the half-time break, but several undisciplined acts proved costly as three players found themselves in the referee’s book.

Friend and De Vanna both had chances in the second half to extend Victory’s lead, with the pair running circles around the Glory defence.

But a defiant Jones did extremely well to protect her goal and ensured Glory remained in the match until De Vanna made the most of a brilliant pass from Barilla to score Victory’s third goal and second against the run of play.

Rosie Sutton, Cecilie Sandvej and captain Collette McCallum worked tirelessly for Perth, but the team’s lack of attacking options were exposed in the absence of sick Matildas star Kate Gill.