Everyone knows about Brisbane Roar's big names; the long time senior Matildas and the internationals.

However, there have been a number of squad players who have played a large role in helping Brisbane return to the W-League grand final.

One of those is unheralded right back Brooke Spence.

It speaks to Spence's consistency, reliability and durability that Spence has notched up over 60 matches in the W-League. Although not the tallest player around, she has matched it with some of the best wingers here in Australia and in the United States.

Possessing a quiet persona, Spence plays and trains with an intensity that belies her reputation.

In the semi final against Canberra, Spence kept an in-form and red hot Stephanie Ochs noticeably quiet with the American unable to have her usual impact on the game.

"Brookie is the type of player who lifts the intensity of every training session," said defence cohort and Matildas centre back Laura Alleway.

"She are a massive part of the team and without people like her you can easily get carried away going through the motions".

Always on the national team radar, Spence has struggled to get regular call ups with Caitlin Foord and Teigen Allen locking down that right side.

Regardless, the 25 year old continues to be an important part of the Brisbane Roar puzzle and also her American W-League club the Colorado Rapids, where she is their captain and voted one of the top three defenders in the league.

On the opposite flank Vedrana Popovic also quietly goes about her business.  Unlike Spence, Popovic has had to take a circuitous route to the Roar with the 22 year old forced to play interstate before returning to her home town club.

Quick and aggressive, Popovic is the modern day full back with strong defensive skills but the ability to drive force and launch attacks. And there is her free kick ability.

Like Spence, Popovic has been on the fringes of the national team but with her first call up and debut in 2013, she might just be in Hesterine de Reus' calculations for the upcoming international season.

Last week we spoke about the young Roar prospects and again on the weekend, they took their positions and acquitted themselves well, in particular Ayesha Norrie. 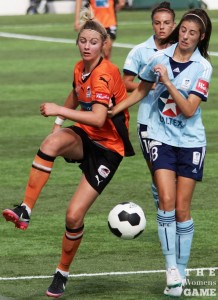 With captain Clare Polkinghorne still not sufficiently ready for the semi final, Norrie again stepped into the defensive midfield role and never skipped a beat.

Even with Polkinghorne on the bench, coach Belinda Wilson had enough confidence in the 16 year old to keep her on the park in a high pressure situation in unideal conditions.

However, it is not only Norrie who has impressed.  Striker Larissa Crummer has also provided options to Wilson off the bench.

At 17, Crummer is already a championship player after lining up with Sydney FC for the 2012/13 season.  Played with great effect as a full back at Sydney, Crummer has returned home to take up her natural striker role.

Off the bench or starting, the Young Matildas' pace, neat touches and clever finishing has perfectly complimented the skills of her fellow strikers Hayley Raso and Emily Gielnik.

"They step up each week," said Wilson.

"Some of have had experiences within the W-League where others haven't and have just come in.  Where they're at, in terms of their development as we look to the near future, is fantastic."

Then there is Kate Stewart.  Stewart is another who had to leave Queensland to get opportunities before returning home to the fold.

For the past couple of seasons Stewart has been the reserve goalkeeper but every season she finds herself playing a large role in the team's success.

This season again Stewart was expected to be the understudy to Nadine Angerer.  However with Angerer sustaining a quad strain early in the second round match against Perth Glory, the 24 year old was again required to step up.

Putting a player of the match performance Stewart repelled an attacking Glory, helping Brisbane to their first points of the season and preventing them from going 0-2.

Subsequent matches saw the Academy of Sport product make several big saves to keep the Roar in matches enabling them to grind out wins and ultimately make the finals.

Although Angerer is back and was impressive in the semi finals, Brisbane owes alot to Stewart in the No. 1's absence.

In fact, for all the superstar power, it is those that we know least about that have made a significant impact.