The 2019 FIFA Women's World Cup is just 43 days away and we're super excited to be heading over to cover the event.

The Women's Game wants to make sure that your trip to France is a fantastic experience so we've prepared a guide to help out.

When is it?
The FIFA Women's World Cup will begin on June 7 when hosts France face the Korea Republic at Parc des Princes in Paris with the final taking place on July 7 at Stade de Lyon.

Who's qualified?
There will be 24 teams from six confederations who will be competing across four groups of six.

The #FIFAWWC Draw has officially been decided.

What do you think? pic.twitter.com/pjcJhmf2kC

The Matildas were drawn in Group C alongside Italy, Brazil and Jamacia. It's a bit of deja vu for Australia as they come up against Brazil for the third consecutive time at a World Cup while they face Italy for just the second time in their history.

After this stage and if the Matildas make it out of their group, it's hard to tell where they will go. There are three different options including Le Havre (seven hours drive), Nice (four hours drive) or Montpellier (two hours drive).

Quick facts about France
France is a country in Western Europe with Paris being one of the most visited capital cities in the world. The country, which has a population of 67.2 million, borders Spain, Germany, Italy, Belgium, Luxembourg, Switerzland, Monaco and Andorra. France is currently on Central European Summer Time which is GMT+2 meaning they are eight hours behind Australia's east coast.

They also use Euro which is the official currency of 19 of the 28 member states of the European Union.

Has France hosted a World Cup before?
Yes, they have. France has hosted two World Cups previously with their last coming in 1998.

Entering France
Do I need a visa?
Now the following information is for Australian passport holders and may be different if you are planning on entering the country on a different passport.

With France being part of the Schengen area, this allows Australians to enter France without a visa for tourist reasons so you don't need a visa for travel up to 90 days in any 180-day period. However, it should be noted that the Schengen zone encompasses 25 other European countries so if you are to travel to other countries inside this area during your time at the World Cup this would count towards your 90-day limit.

Worried? Take a three-minute questionnaire on the Republic of France website for visas here.

If you want to know more about travelling to France, the Australian Governments Smarttraveller website is a valuable tool.

Tip: Learn a bit of French before heading over including the basics like hello (Bonjour), good-bye (Au revoir), please (S'il vous plaît) and thanks (Merci). It will make travelling around the country so much easier.

Tickets
When and where can I buy tickets?
Tickets are currently available for matches except for the opening game, Netherlands and Cameroon, Sweden and USA, Nigeria and France, semi-finals and final.

There are limited tickets available in some matches with the World Cup getting so close but options are still there.

More than 720,000 tickets have been sold for the Women's World Cup in France, according to Fifa.

Tickets can be brought on the FIFA website here.

There are four different categories. The cheapest is category 4 for group stage matches, which will set you back €9 (AUD $14.30) this slowly increases up until category 4 which cost €30 (AUD $47.70).

The most expensive ticket available is a quarter-final category 1 ticket which is €57 (AUD $90.60).

There are tickets available for fans who have wheelchairs, mobility scooters or limited mobility and proof of eligibility is required at the point of request. More information is available here.

Travel
Where are the games being held?
The World Cup will see nine different cities hosting games. In the North of the country, Paris, Rennes, Le Havre, Valenciennes and Reims will host 33 matches between them while in the south Lyon, Grenoble, Montpellier and Nice will have 19 games.

Stadiums are placed in different parts of the city but are easily accessible by public transport. For further information head to the links below:

How do I travel between cities?
There are three different ways to travel around the French cities including trains, buses and planes. Depending on your budget, time and which games you're planning on going to see, it could depend on which mode of transport you take.

If you're looking at trains, there are a few things to know and Seat61 has an in-depth guide if you want to know more. All in all, there are three types of trains TGV, Intercité and RER.

The general rule of thumb is that bookings open 92 days in advance and these are the times to get the cheapest tickets available but also get a spot on the train. However, this is just for TGV and Intercité trains with RER a fixed price no matter when it's booked and no seat reservations.

There are a few different ways to book but for Australians either through the official OUI website or RailEurope but I highly recommend the official site as there is no booking fee and seats can be selected.

Trains are brilliant as they will take you to the city centre (in most cases).

Planes are another way to move about the country but are generally the more expensive option, however, it is quicker than buses or trains. Air France, offers daily services between cities and Paris, with an average flight time of one hour.

There are ways to get cheaper tickets like through SkyScanner but this does come with risk so read the terms and conditions to make sure you are getting what you want.

If you like buses then there are four different options for you including Eurolines and ouibus.

Hiring a car is also possible but remember they drive on the other side of the road and you must be over 21 or 25 (varies from rental company). Some rental companies have more rules than others so hard to give a general overview with no real regulations in place across the board.

Who are the favourites for the World Cup?
The 2015 World Cup champions and world No.1's the USA are firm favourites to lift their fourth title. This is despite their recent form in 2019 which has been a mixed back of results including four wins, two draws and a loss.

Hosts France is right up with their only loss coming to another favourite Germany in February during an international friendly. Germany is two-time World Cup winners (2003 and 2007) and hasn't lost a game since June 2018. 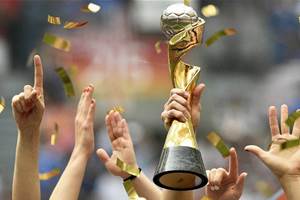 FIFA have confirmed all 552 players set to be in France for the 2019 FIFA Women's World Cup and we have compiled a full list.

England made it to the quarter-finals in Canada and have been on the rise ever since. While the squad is unknown at the moment, the world No.2's are being backed by many to do well at this tournament.

A more in-depth analysis of the teams will be given once squads are confirmed.

How to watch from Australia?
If you can't make it to France, watching the World Cup from the comfort of your own home is also a fantastic option. SBS will have the rights to all the Matildas games plus all games from the quarter-finals to the final while Optus will have every game live.

Games will kick-off between 9pm and 5am AEST.

A blanket and maybe a warm coffee, tea or hot chocolate will be a good choice to keeping those winter night and early morning chills away.

We hope you enjoy your World Cup experience whether it is at home or in France.