When you are friends with Melbourne Victory captain Stephanie Catley, there is really not much choice on which W-League team you will support.

Despite coming into football late, Tom Bell went beyond giving the occasional unwarranted advice to his friend. The 20 year old Victorian became one of the founding members of the Victory active support; one of the first and the most dedicated in the W-League.

With their second home grand final fast approaching with caught up with Tom to find more about his football background and passion for the Victory.

So Tom, have you always been a football fan?

Unfortunately I've not always been a football fan. I grew up in an AFL supporting family but as a teenager I rebelled a bit against all Melbourne's AFL fixation and started watching the English Premier League.

At what stage then did you see your first W-League match?

My first exposure to the W-League would have been a Victory game against Perth (I think) back in Season Two. It was Steph Catley's first televised appearance so a bunch of us tuned in to watch.

What did you first think about it?

I have to admit my first impression of the W-League was not a positive one if I remember correctly.

I'd say this is due to the fact that I made direct comparisons to men's football and wondered why it was so different.

Apart from Melbourne becoming more successful, what turned you around to become as involved and immersed as you are now?

Over the next season or two I became a lot more educated regarding football and life in general, which I feel you need as a male fan of women's football.

For lack of a better term, I'd say you need a bit more maturity than with a lot of sports.

Not to say those male football fans who don't like women's football aren't mature, but I've found the ones who do are often very sport savvy and open.

Eventually I approached the game with a really open mind and found it to be fantastic in its own different way. 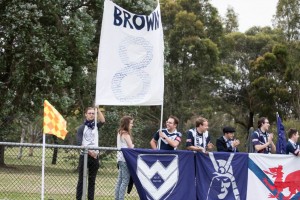 How often do you attend live games or watch on ABC?

Essentially, if there's a way to watch, I'll be watching. I've managed to attend all our home games in the last two seasons and this season made it to an away game as well which was great fun!

I've managed to watch both our live tv games as well; although the one against Sydney nearly saw me put a fist through the wall in frustration!

Why did you form an active support? How does it work?

Eureka all started when my mate Steven and I were in attendance at a Melbourne home game against Brisbane last year, and, as members of the men's teams active support, we were bemoaning the lack of active support.

I turned to him and said "well, why don't we do it?" and the next home game we had a small group of us behind the goal singing and making noise.

Eureka has been a fantastic show of how much people really can care about the W-League.

The group that help me organise it really do a top job in sometimes difficult circumstances.

Have you been able to convert others?

We've had a bit of success in recruiting others to join us, but the classic W-League problems often make it a bit tricky.

The shortened season, the continual jumping of home grounds (often to very un-centralised venues) and clashes with all the other events that go on in such busy city as Melbourne all make it a bit tough at times.

Despite this, we've been able to have active support at all of our home games this season, which we hope the girls have enjoyed!

What is now your favourite part of the game?

Tough question, but on the pitch, the tactical side of the game is certainly a different beast to the men's game.

I feel there's a smaller range of physical attributes in women's football (apart from the truly freakish players, Maika [Ruyter-Hooley], [Lisa] De Vanna, etc.).  So there's a much greater focus on technical abilities and systems that teams choose to play. 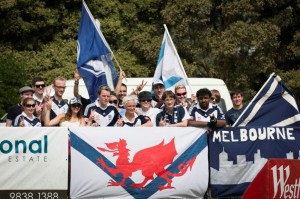 Who is your favourite player (can be from any team) and why?

Well, obviously it's going to be Steph Catley isn't it?

Knowing her and seeing what she's had to sacrifice to become the youngest captain in the league and a first teamer for the Matildas is pretty impressive.

She's also managed to do all that whilst being a great role model (as the majority of W-League players are) and a very entertaining player on the pitch.

Has your support translated to the Matildas?

Mine has, yes. Although, as an England supporter internationally, supporting the Matildas feels a bit like supporting a club side.

However, I'd have them as my number one international side definitely!