Teenager Georgie Horjus is set to make her debut for the Adelaide Thunderbirds at an inaugural pre-season tournament in Brisbane this weekend.

The Adelaide Thunderbirds Pathway Athlete was elevated to the squad that will compete at the Suncorp #TeamGirls Cup after impressing during pre-season training.

For the 17-year-old wing attack and goal attack is looking forward to making the most of this opportunity.

“I’m really looking forward to every part of the weekend. Even if I don’t get many minutes on the court, travelling with the team, being at the pre-season tournament and experiencing the environment of a game day will be a good opportunity," Horjus said.

“Playing against my idols like Nat Medhurst and Steph Wood who are short but can still play in goals is also exciting.

“I am very lucky to be a part of the Thunderbirds environment."

Horjus will round out the all South Australian goal circle alongside Cody Lange, Sasha Glasgow and Training Partner Nyah Allen.

“When Georgie has trained with us and in match play, she’s stood out and has been able to hold her own, which has been pleasing to see," she said.

The Suncorp #TeamGirls Cup will be played from March 8 – March 10 at the Queensland State Netball Centre. 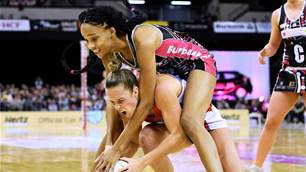