After a huge AFLW Round 6, TWG's writers talk the return of the G-Train, Howarth, Hores and how the Giants are fine just the way they are...

Howarth isn’t one of those players that needs 25 disposals to make a huge impact. Her goal in the first quarter proves that.

She is one of those players that can make something out of nothing, and she demonstrated that talent by grabbing the ball out of the pack and snapping it through for a goal.

She was also able to set up her teammates for a goal, again making something out of nothing and selling some candy to allow Jordan Hickey her first ever AFLW major.

Putting away two goals in one minute, she singlehandedly put the Eagles to the sword. When the ball is with Howarth, the Suns are in safe hands.

Howarth finished the game with four goals and continued to push her case for the NAB Rising Star as well as being one goal behind the leading goal kicker.

Another TWO in less than a minute for Kalinda Howarth 🤯#AFLWEaglesSuns pic.twitter.com/0mJsfggEAK 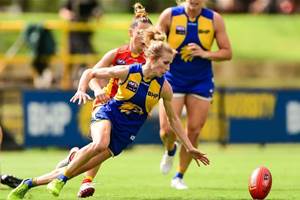 It was the battle of the expansion teams, with West Coast looking for their second win, while the suns were still in the hunt for finals. The Gold Coast Suns took home a vital four points, keeping their slim hopes of reaching finals alive.

Crows vs Giants​ GWS measuring up for finals

GWS is not the prettiest team to watch. Hey, the Giants don’t try to be.

When you take on Alan McConnell’s side, you’re playing a team that scraps and harasses all over the ground, suffocates the opposition’s ball control and patiently waits for the chances created by the panicked and frustrated disposal that the pressure creates.

GWS’ first ever win over Adelaide was built upon a similar style to the Round 1 win over Gold Coast, in which the Giants doggedly held its faith to the plan and won because they made fewer mistakes.

With GWS now two games clear in the Conference A top three, we can study how the Giants could stack up against their potential finals rivals.

Do the Giants have as many elite players as North Melbourne? No.

Do they score as prolifically as Fremantle? No.

Do they rebound out of defence as spectacularly as Brisbane? No.

Is there any side that values the even and committed fight at contests as much as GWS? No.

And it is that difference that the Giants have from their opposition that could prove decisive at the pointy end of the season.