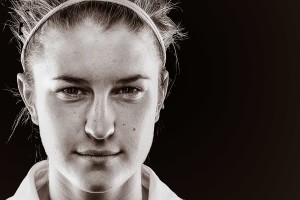 Being left behind is not easy.

But that is where Melbourne Victory striker Caitlin Friend had found herself in the last two years as she watched many of teammates and friends move forward  into the senior Matildas.

In and out of Vicki Linton and then Mike Mulvey’s squads, Friend, who had been a prolific goalscorer at U17s level, found herself and her football drifting.

This year the 20 year old has come roaring back.

An integral part of Dave Edmondson’s forward line, Friend has answered the faith with seven goals this season placing  her second in the Golden Boot race, behind former teammate Jodie Taylor, and overtaking Taylor as the all time leading Victory goalscorer.

A good W-League season has seen Friend rewarded with a big move to FA Women’s Super League side Notts County where she will team up with fellow Victory player Katie Hoyle.

I caught up with Caitlin Friend to discuss the challenges she faced and her turnaround .

Coming off a tough Season 5 where you were injured and spent a lot of time on the bench, what changes have you made given that you now have a starting position in the Victory squad?

Last season was a pretty bad season for me. I went into the season having an injury and that didn’t properly get diagnosed until later on in the season when I found out I needed surgery.

I was playing on cortisone and anti inflammatories. I was always distracted and I never really got into the training team. I was kind of just on the outside a bit.

This year I have had a really organised pre season. I was playing in the WPL. I had good game time behind me. When you have that structured pre-season it really helps when it comes to getting into Victory. I was a lot more prepared.

Dave [Edmondson] came in and had a lot of confidence in me. I play much better football with confidence. I scored a few goals in the first few games. It all comes down to the pre-season and if the people around you believe in you.

This may sound strange, but did you see any positives from being injured?

I had surgery and took a bit of time out and when I came back I was just so thirsty to play football.

"When you have a break from football it just gives you back the passion and you love it so much."

You miss it so much and you realise you kind of need to be reminded of how much you love football and that’s a good thing for you.

You just want to do the best you can do and you work that much harder. You mature in that sense. It helps with my preseason having my body completely ready for Victory. 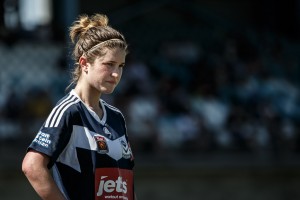 Did you develop tactically from watching on the sidelines?

Specifically the last couple of years I’ve focused more on analysis of my game. I would sit there and watch myself play.

I’d go through specific things where previous years I have really focused on that as much.

When you’re more mature and you figure out ways that you can improve your game and going through footage with your coach so they can pick out things.

It improves your game so much more and it’s so important to go through video analysis particularly as the W-League gets more professional.

You’re a bit of an under the radar kind of player, yet you’re right up there as a leading goalscorer. Explain how that happens?

There are a lot of big names in the league and I’m happy to be under the radar because  defenders sometimes don’t take me very seriously they might lose a bit of concentration and I’ll take advantage.

Still, you’re a target yet you continue to score. What’s the secret?

This year particularly, I’m finding myself in the right positions. Having my body right, having the level of fitness allowing me to get into positions later in the game when defenders might not be able to get there.

Having players like Lisa [De Vanna], Jess Fishlock and Enza [Barilla] who are constantly feeding me, it’s almost hard not to score. I’ve just got to keep working hard and getting to the right positions. All I’m really doing is tapping them in.

A big part of my game is awareness of how other players around me can play and knowing how they play and making the runs and positioning off that. 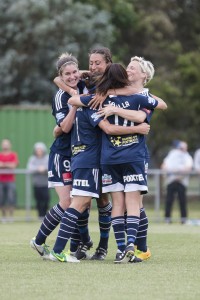 Having a good understanding of how Jess and Lisa play can make my job easy because I know what they’re going to do with it before they do it.  It makes the scoring part quite easy but there is a bit of work.

This is some of your best form but you had an amazing period going through the junior ranks and had some success with the U17 and U20 National teams, but it hasn’t yet led to senior representation.

I wasn’t expecting the U17 team so I was thankful I was even noticed. Robbie Hooker was the coach and he believed in me as an attacking midfielder.

I scored a hattrick in my first game and I was the highest goalscorer in one of the tournaments so I had a really great U17 couple of tours.

I was scraping into that squad. I didn’t make the initial squad but then I got a call up [due to an injury to another player] to go into the qualifiers. I didn’t get any game time which killed my buzz a little. I haven’t really been noticed since.

Watching your friends go on to the Matildas, how do you cope with that? Is it a source of inspiration?

There’s no hard feelings for whoever is getting a call up because everyone deserves it.

"I just feel like when the time is right I’ll get called up."

I just have to concentrate on my game.

You have your years and there are a lot of factors involved with your playing potential.

How does playing with the Melbourne Victory team, including world renowned goalscorer Lisa De Vanna, help and challenge you as a player?

It’s interesting. First of all it’s amazing to play with two of the best players in the world like Jess Fishlock who just came from Seattle [Reign] where she was MVP, and playing with [Megan] Rapinoe and Hope Solo some of the best players.

Having her play with you and [you think] maybe I can match that and do something further with football.

Then there’s Lisa [De Vanna], who I think everyone knows is one of the biggest football personalities in the world and you just don’t know what you’re going to get with her.

It’s just a massive learning curve for me because you get all different footballing brains and learn from that. They take football so professional, we just learn so much. 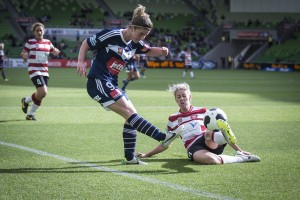 I like the link Melbourne Victory have with Seattle Reign with Jess Fishlock returning this season and Lauren Barnes in a guest role. Do you see that continuing?

Jess Fishlock brings in a lot of interest from various clubs around the world. She has a lot of contacts and I’m going through her contacts to play in England next year.

If there was one player that you could get Jess to steal for the W-League from  anywhere in the world, who would you pick?

It’s a hard question, but you would have to go with Marta because she’s just that incredible. If she came to our league it would just make it absolutely insane but if we had an Abby Wambach or Carli Lloyd or if we brought back Rapinoe, any of those players would be incredible. Personally I would love to play with Abby Wambach.

What’s next for Caitlin Friend? Where do you see yourself in five years?

I want to travel the world as much as I can until I am old and retired and sore and fatigued. I’d love to play in all different leagues across England, America, anywhere really and then play in the W-League in the offseason.

The best thing about W-League is it’s every other league’s off season. That’s ideally what I would love to do is just travel the world playing football.