The Matildas, despite their youthfulness, made their second-straight quarterfinal with Foord emerging as the team’s most celebrated young talent.

“It was just a reward that I didn’t really realize how big it was until a couple of years later when I look back and I think, wow, that was really a cool thing to win."

Part of Foord's evolution as a player was her transformation into a defender. After surgery on her broken collarbone, the then-21-year-old, who would at time avoid gym work, was forced to spend in the weight room recovering from her injury changed her physical profile.

While she occasionally plays in the backline, her power sees her explode into space over short distances in the way strikers need to seek out the ball. It was a learning experience for Foord not only for her 2016 injury but the foot injury that would cost her half of 2018.

“The little things that I probably wouldn't do before, or the kind of annoying things, they are important,” she said.

“That’s just come with sitting out from the game. It makes you cherish those moments a lot more when you are back out playing because there is nothing worse than having to sit on the sideline and having to watch.”

Since her lisfranc injury, Foord has only grown. Against Chile in November, she recorded her first international hat-trick before scoring 10 goals during the recent W-League season and finished second on the Golden Boot race. 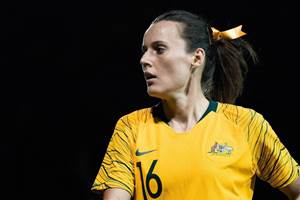 Heading into France though it's another step in the journey in the making of Caitlin Foord.

She has high hopes for the Matildas chances in France as well.

“Last World Cup we went thinking we could win, as well but I've said a couple of times now that going into Canada, we knew we could, but I think the belief was missing within the team.

“Four years round, we think we can win, and the belief is there that we can win. We just know if we are playing at our best as individuals and as a team, we can beat anyone.”