It's been a story of resilience and a source of inspiration for those young fans who look up to the 24-year-old.

Raso broke three vertebrae in her back last August and after five months of recovery and rehabilitation, she made her return to the pitch for hometown side Brisbane Roar in January before going onto score in the following game.

From there she's gone on to fight for her spot in Ante Milicic's FIFA Women's World Cup squad.

In a story released by her NWSL club, Portland Thorns, on Wednesday, Raso speaks about how she overcame injury and heartbreak to be on that plane to France.

Her story starts in 2015 when four years after her W-League debut, she didn't see a single minute of game time in Canada. Despite this, with 13 Matildas caps to her name, she was headed to the United States to play with Washington Spirit in the NWSL however, this is where the first heartbreak would happen.

Today's the day I make the trek back down under ✈️🇦�� What an absolutely incredible journey I've been on. My love for this team and this place is beyond words ❤️

Spirit changed coaches as Mark Parsons, who had brought her to the club, stepped down from his position and was replaced by Jim Gabarra just two months after Raso made her debut. Under the new coach, Raso didn't see any game time and by April 2016, she was waived from the squad.

“It was hard. It was really hard,” she said.

“You’re in a place, and you think you’re comfortable in that place and that's where you want to be. So then to hear you're not going to continue on in your club team. I wondered what would I do, or where would I go? Where would I play or would I keep playing? If I don't have a team, what do I do?”

At the same time, she was dropped from the national team. It was an Olympic year and Raso was still searching for a new club in the USA but as they say, opportunities pop up in interesting ways.

Parsons, who was now the head coach at Portlands Thorns, handed her a lifeline in 2016.

“I was in this place of doubt and wondering, where is my soccer career going to go now? Mark gave me that second chance, so I just grabbed it with both hands,” Raso said. 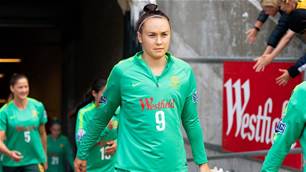