Unlike most international leagues, the younger demographic of Australian football has allowed for young players to step onto the national stage at an age where they are still covering their schoolbooks with Justin Bieber or One Direction wraps.

Unlike most international leagues, the younger demographic of Australian football has allowed for young players to step onto the national stage at an age where they are still covering their schoolbooks with Justin Bieber or One Direction wraps.

This has been the case since Season One with Sam Kerr lighting up the league as a prodigious 15 year old.

However, the increased pace and intensity of the improving W-League makes it more impressive that a number of 15 and 16 year olds have made their presence felt.

The needle in the haystack

Every year thousands of young girls take up football but only a handful can make it to the elite level. So what makes them standout from the pack?

For the story of the season Emily Condon, it was about an "it" factor which Adelaide United coach Ross Aloisi first spotted in the Year 9 student at an NTC challenge in Canberra.

"She was a young girl who didn't really know how good she was," remembered Aloisi.

"Emily was very good with the ball at her feet, had quite a bit of pace and was not afraid to run at people."

Aloisi's punt has been justified early with Condon becoming the youngest W-League goalscorer, at 15 yrs, 132 days, when she helped the Reds to a 1-1 draw with the Western Sydney Wanderers in Round 8.

Condon's attributes are the same ones that first made a young Sam Kerr and Caitlin Foord also shine a little brighter.

It's no coincidence these two players have ended up at Sydney FC with Alen Stajcic; arguably one of the best identifiers and developers of young football talent.

"Caitlin was mobile, agile and had good enough technique to move with the ball and without it and has been from a very early age," said Stajcic of why he brought Foord into the then NSW Institute of Sport football program. 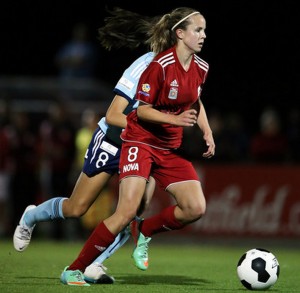 However, the physical is not enough for young players who are set to take on more mature bodies in the W-League or internationally.

Melbourne Victory coach Dave Edmondson saw that little bit extra in Beattie Goad, who had the youngest goalscorer record a week before Condon took it away.

"It's her awareness and vision within the game," said the former NZ Under 17s coach.

"Beattie has shown a real understanding of the game. That was the biggest thing that led me to believe that she would step up."

"She picks things up so quickly at training and she sees things on the pitch."

That understanding, reading and awareness of the game is a trait all the young up and comers have demonstrated and has held them in good stead in the W-League when they don't have size and strength on their side.

Regardless of how many basic attributes they have, the step up from junior football is still a big one, even in the only 12 game W-League season.

So how does a coach know when a player is ready?

"Players who have been able to get by on their strength or size in the junior football, they can struggle a little bit more because they do get put up, all those benefits are kind of taken away," Edmondson stated.

"Players like Beattie, their knowledge of the game and their football smarts allows them to adapt their game a little bit and play what suit against the older and more physical players."

Goad, a slight and deceptively swift midfielder, has thrived in the Victory environment despite not yet having acquired the bulk or strength of a seasoned professional.  However that has fazed the 16 year old.

"Beattie is so well balanced that a lot of it is just natural for her," continued Edmondson.

"She takes the bumps, takes the knocks and she manages to ride a lot of tackles."

Meanwhile for Ross Aloisi it was a waiting game for Condon. From the country, and still in school, Aloisi had to wait for the conclusion of the school year before she could manage the four weekly training sessions and 12 hour and 1300km weekly from Port Pirie and back. 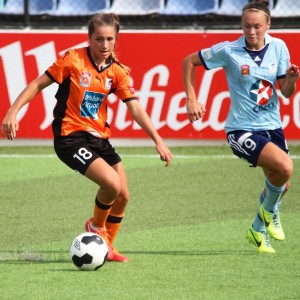 Brisbane's Sunny Franco also getting minutes in her debut season

Once she could make all the training sessions, it didn't take long to see she was ready. Then came the next question, how to ease her into the league.

"We didn't really want to start her because she was so young even though once she came on her was dominant on a few occasions."

Condon eventually did start the last match of the season but it was a slow process of building the teenager up to be able to physically handle it, to ensure that she was not overloaded.

There can be a misconception with coaches that because players are young and fit, they can take it all on.  Overload of work (training and games at high intensity) can lead numerous soft tissues injuries including strains and sprains  of muscles, ligaments and tendons.

"A credit to the FFA coaching accreditation to give us an understanding of training young players," praised Aloisi who learned about young player management in his A Licence course.

He readily admits prior to the course he was less aware of the stresses that can be put on a young body.

"Now in training sessions we are quite mindful of the younger players that we pulled them out at the right time, and I think that worked."

The challenges of developing young players go beyond the physical and the football.

Mentally the challenges are possibly greater for players often juggling school, regular domestic and international travel, group environment with older players and, if they start to succeed, media attention. 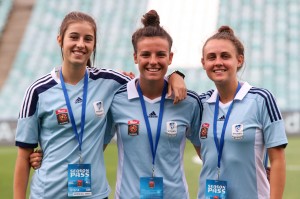 Although strong, Sydney FC is full of teenagers including Amy Harrison, Chloe Logarzo and Olivia Price

"Some do get a little bit excited once they have played a couple of games,"says Aloisi on how to deal with keeping players levelheaded.

"With Emily she is just that type of person that she doesn't get ahead of herself."

Keeping a look out of the mental wellbeing of players is a continual effort by many parties but most importantly by the family.

Spending time with several Young Matildas parents including the Rasos, Checkers, Logarzos and Harrisons, it was evident how crucial their emotional support is to the well-being of their high achieving teens.

It's particularly vital when facing the ups and downs of football where a player may be playing regularly for a stretch and then just getting a few minutes here and there weeks late.

Then there is the match mentality. The football world is full of talented players who didn't have the will or drive to succeed at the next level. Mentality is an important a factor as the physical says Edmondson and he has identified that trait in Goad.

"You look at her and she is such a lovely kid, always with a smile on her face but there is a real edge to her as well."

"She never gives second best and she will battle it out with your Lisa De Vanna's, your Jess Fishlocks and anyone else."

In the end, despite having the physical, mental and emotional iq now, there is still a long way to go for these young players.