The Matildas will face a rejuvenated Taiwan who upset Thailand in an Olympic Games soccer qualifier on Monday.

Taiwan opened the final round of women's Olympic Games football qualifiers with a surprise 1-0 win over two-time World Cup finalists Thailand at Campbelltown Stadium on Monday.

A goal from captain Ting Chi on 19 minutes proved to be enough for an invaluable victory in a match where players struggled for fluency amid blustery conditions.

Taiwan will be Australia's opponents when the Matildas belatedly take the field for the Group B opener at the same venue on Friday.

Monday was initially planned as a double-header, also featuring Australia and China, but the match schedule was adjusted last week due to the coronavirus.

Tsai Ming-Jung proved herself to be a capable shotstopper, saving her side on several occasions, although she looked susceptible with high balls.

After Ting Chi smartly turned home a misplaced shot from Wang Hsiang-Huei for the opener, forward Chen Yen-Ping spurned a golden opportunity to double the lead on the half-hour mark, failing to hit the target with only the goalkeeper to beat.

Thailand's best openings came seconds prior to halftime with Taneekarn Dangda seeing her glancing header blocked by an unsighted Ming-Jung before the goalkeeper made a superb diving save from a Silawan Intamee effort just moments later.

Thailand pressed for much of the second half but cohesion in attack largely remained lacking, and they managed few shots on target, aside from some notable long-range efforts from the boot of Ainon Phancha.

Australia will take on Thailand on Monday before a meeting against China on Wednesday next week in a match that is likely to decide the group winner.

The top two teams in the group will meet one of Korea Republic, Vietnam or Myanmar in home and away play-offs next month for two spots at Tokyo.

Australia narrowly missed the medal round at the Rio Olympics four years ago, suffering a heartbreaking penalty shoot-out defeat against host nation Brazil.

Socceroos romp toward WCQ third round 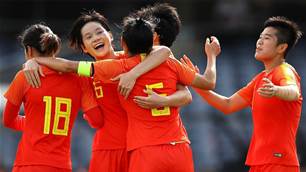