There are really two reviews to write for the first W-League semi-final of season 8 featuring Canberra United and Sydney FC: the game, and the decision.

There are really two reviews to write for the first W-League semi-final of season 8 featuring Canberra United and Sydney FC: the game, and the decision.

Sydney FC played this game like their season was on the line, while Canberra Utd took their steady time, eventually running out of it. In the warm up, the two teams underwent similar drills but showed completely different personalities – Sydney FC with a steely gaze, Canberra United loose and relaxed. From the kick off, Sydney took the ball directly to goal, while Canberra enjoyed the bulk of possession, knocking the ball around but lacking the precision of their midseason peak.

Jasmyn Spencer was the dynamo for Sydney, turning Canberra’s midfielders and fullbacks inside out, only to be stopped at the last lunge with saves from Rebecca Kiting, Ellie Brush, and even the right upright in the match’s play of the day in the 43rd minute which saw Sydney FC take to the sheds with a spring in their step.

At the other end, Alanna Kennedy was flawless for Sydney, making time for herself, dominating Michelle Heyman who didn’t see much of the ball at her feet, and stopping Ashleigh Sykes’ penetrating runs like no other fullback has managed this season. Kennedy was supported well by Michelle Betos who was called on to make two big saves, one on Sykes who forced Betos to stretch, and a tip over the bar from an Ellie Brush headed corner.

Canberra United missed midfield dynamo Veronica Perez in the opening stanza, but even more so as the game wore on when Sydney FC started to dominate the midfield, creating attack after attack.

Perez, on international duty with the Mexican team in China, has been a revelation in the W-League this season, and her fluid running through the midfield, and ability to join up play all over the park but particularly around the top of the box,  was a feature missing from the home side’s offense.

Playing with two holding midfielders in Kendall Fletcher and Julia de Angelis, Canberra had to rely too heavily on Caitlin Munoz who appeared to be hobbling within 15 minutes of kick off, and looked restricted in set plays where she is normally so dangerous.

Canberra had most of the most possession in the first half, and the second to be fair, but really only ramped up their desperation after they went a goal down. 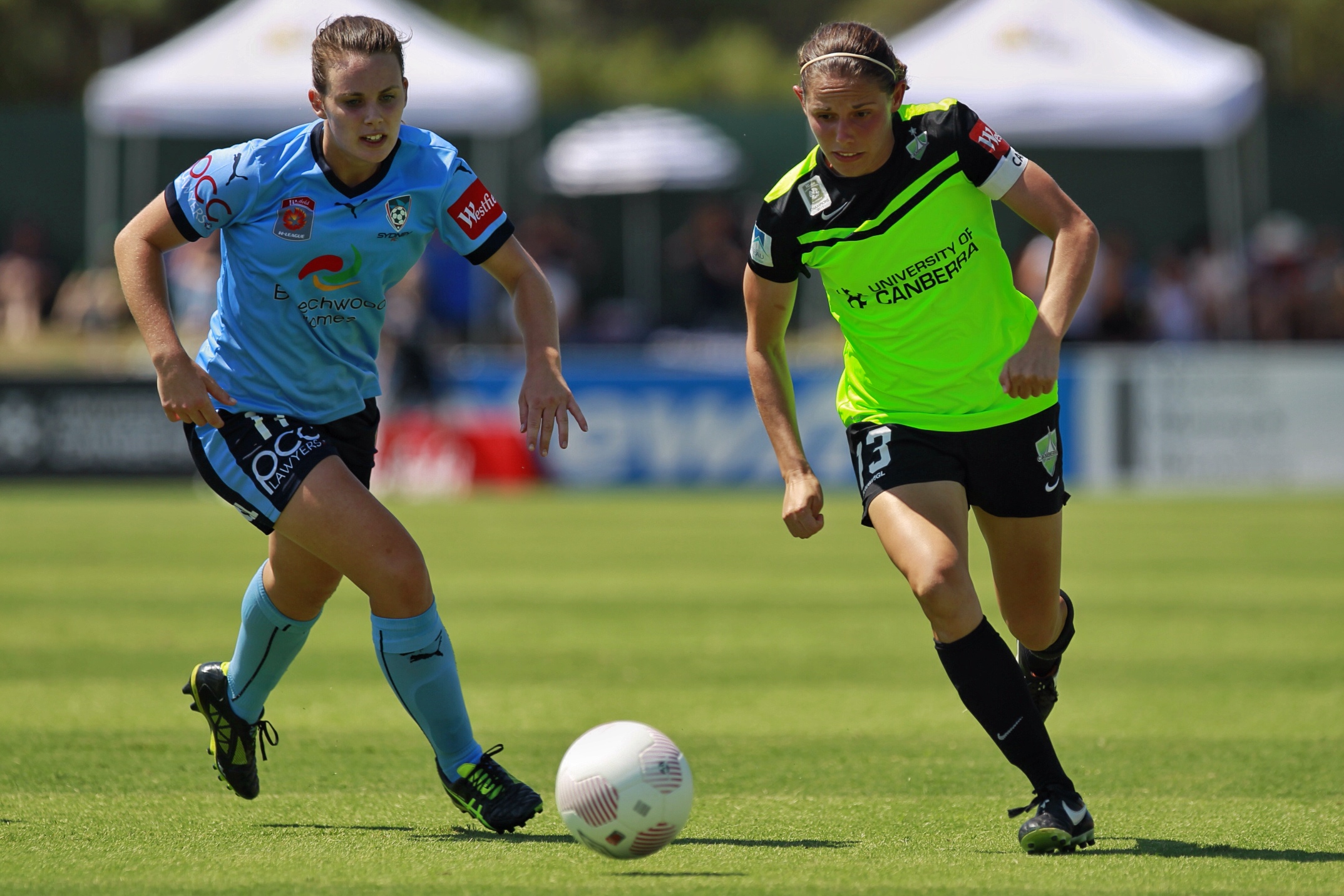 To call the goal controversial is an understatement. Lee Gaskin from the Canberra Times and Fairfax Media called it ‘a howler’. I’ve heard the term ‘attrocious’. ‘Foul’ springs to mind.

Canberra’s coach Rae Dower was very careful not to say anything about it. “There’s six officials out there and the goal stood. You saw it yourselves. We all saw it. There’s nothing we can say about it. If I told you what I really think, my credit card would have to be out there. My wallet’s not deep enough to cop that fine.”

It all stemmed from a long speculator lobbed into the box from Princess Ibini in the 61st minute. Kyah Simon challenged Lydia Williams on the goal line, the ball spilled to the top of the box, and Jasmyn Spencer knocked it past the hapless Canberra defenders.

In real time, Williams looked to collapse almost, rather than reaching up to take what should have been a regulation catch. On replay, it’s clear that Kyah Simon is holding Lydia Williams’ arm down so she is unable to reach up, and at the same time, hip-checking Williams’ legs from under her, explaining the collapsing motion.

Dower explained it neatly post-match. “I think if she had two arms and been able to jump… you saw the save she made on the goal line. She can jump and when she’s not being fouled, she can make the save.”

Despite the protestation of the Canberra United players, including the captain Nicole Begg who explained after the match that she tried to speak with the referee to discuss the infringement but had been refused an audience, the goal was awarded.

To compound the matter, Lydia Williams was yellow carded for dissent, frustrated from being on the end of a foul that, had it been committed anywhere else on the park, could conceivably seen Simon yellow carded for holding her opponent. 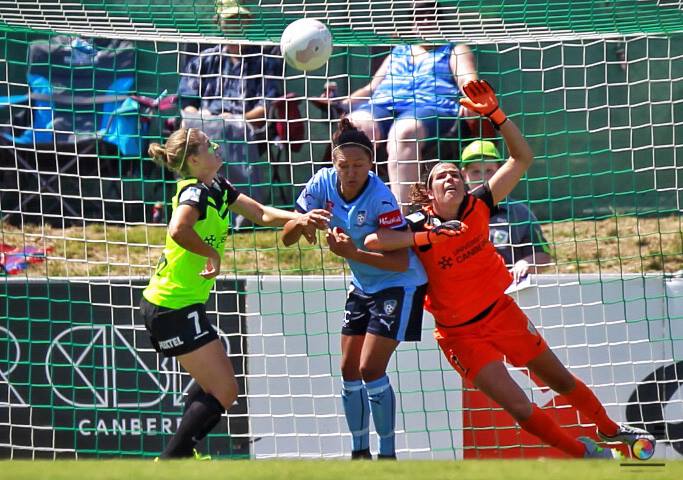 After the match, Begg described what happened on the field. “I was trying to calm her down – trying to talk captain to referee, which is difficult in that situation because she’s made a big call. She’s fired up as much as us. I was trying to have a word to her and she didn’t want to talk.”

The real mystery remains the role of the goal line officials. Introduced this round as a measure to ensure correct calls in and around the goal mouth during the semi finals and final, it’s difficult to fathom how this foul was missed by six match day officials on the ground.

The Canberra crowd’s reaction to the officials leaving the field at the end of the match was unprecedented at a W-League match in the capital – a reflection of their distaste for both the decision and the reaction to their team’s request to discuss the matter with the officials.

The goal set the game on fire with chances at both ends. Sydney FC were injected with a spark of adrenalin that kicked their energy up a gear. Canberra United were raging, chasing down balls they might have left in the first half, realising the urgency of the situation.

Canberra’s coach Rae Dower played her trump cards, bringing on Emma Kete to cause havoc up front, then Nikki Flannery with 10 minutes to go, shifting to three at the back. Sydney FC’s Dan Barrett countered, bringing on Sunny Franco for some fresh legs, then Renee Rollason to bolster the backline.

Canberra nearly snuck through in the last few minutes when Nicole Begg whipped down the left wing and laid a perfect ball back to her twin Ashleigh Sykes. Any other day would see Sykes finish that cleanly, but her scuffed shot allowed Sydney FC to clear the ball and within minutes the Sky Blues were singing with their fans for another shot at W-League glory. 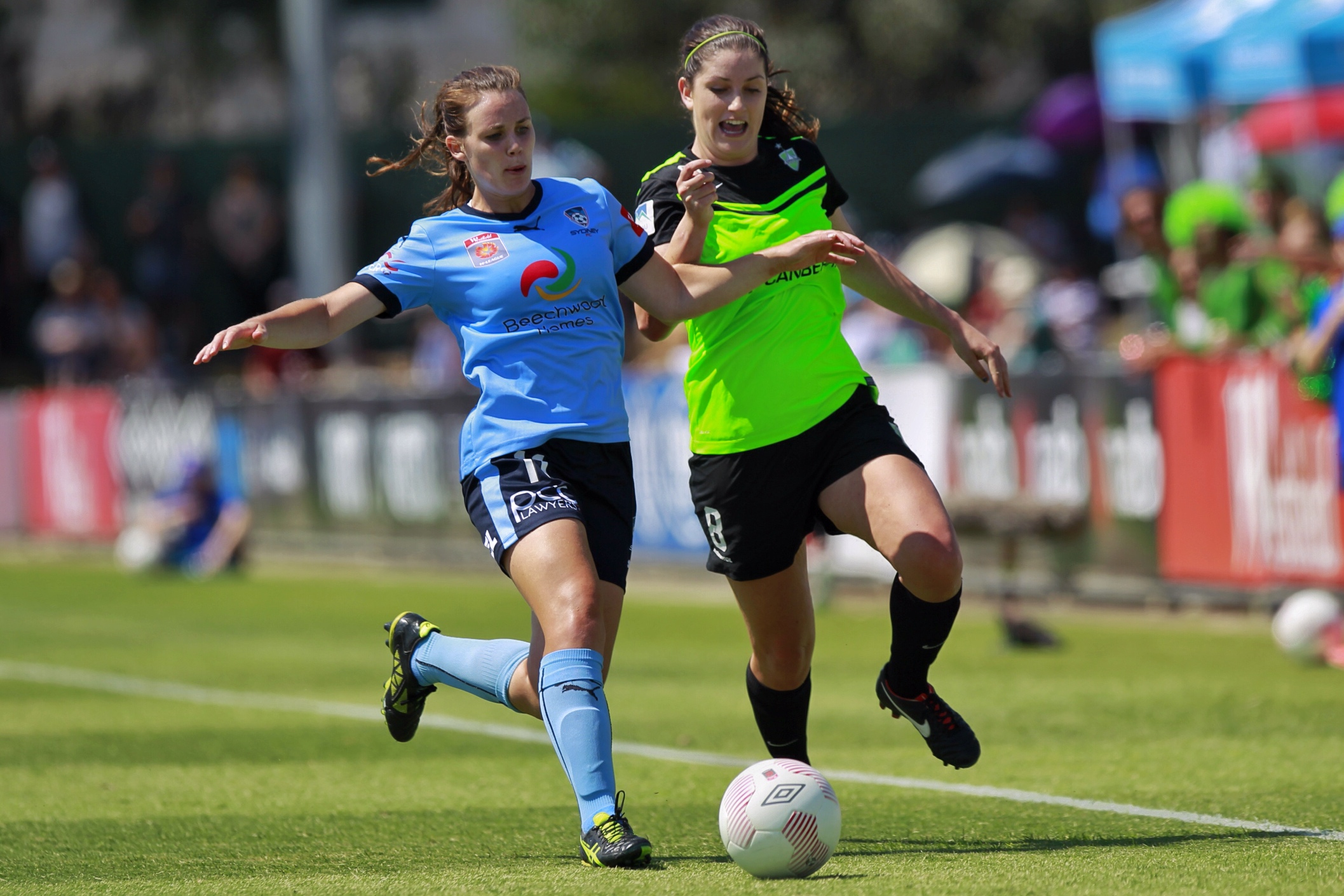 Dower admitted that Sydney FC were the better side on the day. “We didn’t take our chances today and we find ourselves in this position. I told the girls how proud I was of them."

"I don’t want today to define our season because that would be unfair. We’ve shown as a team that’s we’ve grown throughout the season. We didn’t bring our best display today. All the best to Sydney next week in the final.”

The visiting coach and captain were ecstatic after the match. Daniel Barrett was especially delighted. “I thought it was a fantastic game. I thought both teams had opportunities to win the game. I’m very grateful just to be on the winning side today. Canberra gave a great performance, we knew it would be that way. We’re just very happy.”

Barrett admitted he hadn’t seen the challenge that led to the goal “There seems to be a lot of talk about the goal – I’d have to see it. When you’re on the sideline, things happen so quickly. We still have to put them away, so I’m grateful Jasmyn did that.”

Sky Blues captain Teresa Polias who did a mountain of work throughout the match was buzzing. “It’s extra special [to win here]. We haven’t had much success here in the last couple of seasons. We’ve just worked really hard this season, so it’s nice for things to come together in the last few weeks."

"It’s an amazing feeling. In the last few weeks our confidence has been building. We’ll see who we end up playing tomorrow – it’s nice to be able to watch the game and relax tomorrow and come Tuesday we’ll focus on the game.”

Barrett agreed that the last few weeks have been pivotal to Sydney FC’s success. “We’ve made some changes to the way that the team’s played over the past years. It takes time. It takes time getting used to me as well.

"The last few weeks we’ve been on the one page and it’s all coming together at the right time. You don’t win the season in the first two games. It’s nice that it’s all happening now.”

The grand final is set. Melbourne City just received their biggest scare of the season, scraping through to the final past a disciplined, strong and tenacious Brisbane Roar outfit, and the W-League championship is well and truly up for grabs.