Both Sydney and Melbourne set to feature in the finals 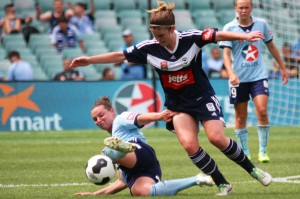 Both Sydney and Melbourne set to feature in the finals

Sydney FC and Melbourne Victory shared the spoils with a 1-1 draw in front of a vocal sky blue crowd at Allianz Stadium. As anticipated, the second match-up between the two powerhouses was a battle of the midfields with possession lost and won in a heartbeat.

Sydney controlled the early passages with their midfield cowing Melbourne.  Nicola Bolger and Teresa Polias were a solid combination while Renee Rollason put in her usual strong performance whether defending stoutly or crafting an attack.

Upfront Emma Kete continues to grow into the leading striker role causing numerous issues for the Victory defence out wide and Foord doing the same on the other flank so it was fitting these two combined for the opener.

Foord’s tenacity was endless and she was able to beat two defenders and hit a crossbar clanger which Kete expertly cleaned up in the 36th minute, handing Sydney the lead.

Shortly after the home side went up 1-0, Sam Kerr hit a solid header past Brianna Davey but celebrations were early as the offside flag ruled the goal disallowed. This proved a key moment for Sydney as it kept Melbourne within close striking range leading into the second half.

Sydney FC’s experience at the Mobcast Cup club tournament was evident in their quality build-up but by the second half the squad looked fatigued and Victory were ready to capitalise on this.

The result of the fatigue was Sydney uncharacteristically giving the ball away too easily and in dangerous parts of the field.

Stand-out player Jessica Fishlock was there to pounce on this. A constant threat, she inevitably threaded herself into the box and slotted the ball into the net at the 81st minute.

It was a much-improved Victory outfit since the first round match-up with opportunities aplenty created by Caitlin Friend and Lisa DeVanna, and Swedish import Jessica Samuelsson hitting the crossbar.

Samuelsson, along with Fishlock, is an example of the difference in Melbourne.  With her on one flank and Steph Catley on the other, it was a better balanced Victory defence this time round able to deal with the speed of the Sydney attack while providing attacking impetuous.

Sydney had some success in quelling Lisa De Vanna’s blistering pace by double-teaming but this often left pocket rocket Enza Barilla and Caitlin Friend with space and time.

As they say, every action has an equal and opposite reaction.

The 1-1 draw a fair result on the day but given Sydney’s slump in the second half Victory will rue not being able to run away with the 3 points.

Overall the Victory finish lacked power which proved costly but in-form Sydney goalkeeper Casey Dumont was well-positioned with quick hands which added to the challenge.

Expect to see more edge-of-your-seat action between Sydney FC and Melbourne Victory as the two currently sit in the Top 4 of the table and present as strong finals contenders.