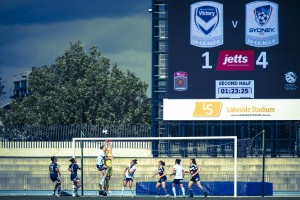 Sydney FC gave Melbourne Victory a good lesson in football with a 5-1 belting at Lakeside Stadium. Victory had a promising start, scoring in the first few minutes, but they were in pain thereafter with the travelling Sky Blue team turning on their A game.

What happened to Melbourne? Fitness, depth, strategy? On paper, Melbourne had good players but today the reality was that Sydney had a good team. They worked together, trusted each other and backed each other up.

Jodie Taylor was too quick for Melbourne’s defenders, exploiting their weaknesses along with teammates Nicola Bolger and Sam Kerr.

Bolger was one of the players of the match but you could add Taylor to that list as well, with Sydney FC captain Teresa Polias the biggest standout.

Goal scorer Emma Checker was one of the best players for Melbourne earning praise from Sydney FC coach Alen Stajcic for her work on Taylor. Key striker Lisa De Vanna worked out how to cut through to create her own space, but she was well tagged and her opportunities were few and frustrating.

Melbourne’s forwards generally seemed to lack pace and direction with Sydney getting back in numbers, flooding the box around Laura Spiranovic and De Vanna. Caitlin Friend was backtracking with nowhere to go as Melbourne across the ground appeared flat footed wondering what to do.

How does Melbourne come back from this and how does Sydney keep moving forward?

It’s only round one so Melbourne have plenty of time to regroup, but this loss will be a big hit to their confidence.

Number one, Melbourne need to string a couple of passes together. Their defence needs better structure and their forwards need to work together linking across the ground and creating space.

Goalkeeper Brianna Davey, who personally had her “best pre-season ever” playing in Sweden, looks forward to the whole squad being available with the arrival of Jessica Samuelsson next week and Jess Fishlock a few weeks after that.

After a 5-1 victory, Sydney are on the right track but they lacked rhythm in the first 15 minutes and were flattered by some defensive errors by Melbourne. Other than that, this was a great start and it bodes well for their season with Danielle Brogan and Caitlin Foord yet to return from injury. Ellyse Perry may be another injury concern with Alen Stajcic reporting a deep cut to her leg.

All in all, Melbourne were outplayed and Sydney deserved winners.