Sydney FC unveiled a new home ground and secured a 2-0 win over a confident Adelaide United on a warm clear Sunday afternoon.

Nervous tension was in the air before kick-off, complimented by many excited faces both on the field and in the stands at Lambert Park.

An unusual slow start from Sydney FC saw an evenly matched opening 25 minutes with both goalkeepers seeing more of the ball then they would have liked.

Reds 'keeper Melissa Barbieri collecting a few deep crosses casually out of the air keeping the Sydney attack at bay. Casey Dumont equally busy at the other end quelling the Adelaide counter attack.

Adelaide United saw their fair share of the ball with the midfield nexus of Kristy Moore, Katrine Pedersen, Katie Holtham and Lisa-Marie Woods providing early chances that they couldn't convert.

Midway through Sydney started to look dangerous through the midfield with Teresa Polias, Nicola Bolger and Nat Tobin but the final pass and finish in front of goal left them wanting.

Adelaide's late first half sub introduction of Emily Condon resulted in the burst that the Reds needed as they picked up momentum and regained some possession.

Barbieri could only do so much as Sydney had a run of dangerous crosses and corners before a quality Samantha Johnson lob found the head of WNY Flash striker Jasmyne Spencer handing Sydney the lead at the 38th minute.

TWG's season guide posed the question of whether Adelaide could be more attacking this season and they answered it in the first half. The more confident and mature Adelaide United lifted their heads and immediately fought for an equaliser.

A roasting Emily Condon shot miraculously parried by Dumont onto the post and kept Sydney in the lead.

Tiarn Powell also found herself in some space and perhaps with the best opportunity of the game but her volley didn't find the target. Powell and Condon with two key moments for the Lady Reds.

An equaliser just before halftime would have buoyed the team over the break allowing them to return to the pitch on even ground.

The second half mirrored the first with Adelaide again storming out of the blocks. Woods, moved into a more advanced position, rattled Sydney FC's post and troubled Dumont.

The visitors were making their mark and making the Sky Blues look flat footed and in danger of conceding.

However as time wore on Sydney started to gain greater advantage with the Lady Reds seeing less and less of the ball, sitting deeper and continually defending.

Bolger returned the woodwork favour smashing the crossbar but not before Spencer found her second of the game in the 69th minute.

Spencer securing her spot in Sky Blue starting line up with a stunning brace on debut with US colleague Johnson also impressing with her pinpoint passing.

Amy Harrison's many commanding runs shows her as an ample replacement for Emma Kete. Harrison's pairing with Spencer and Bolger at times looked uncertain with miscommunication but the potential is evident.

Sky Blue smiles were all around as a forceful Teigen Allen and staunch Servet Uzunlar slipped back into the jersey as if they had never left.

Both teams seemed relieved to hear the final whistle with fitness a visible issue in the opening round with many players exhibiting signs of cramp as the game rolled to a conclusion.

Ross Aloisi's Lady Reds left with their heads held high and deservedly so. Ultimately the Lady Reds were unlucky not to get on the scoreboard with a few strong opportunities kept out only by Dumont's fingertips or a wayward shot.

Expect a higher scoring affair the next time these two meet when both teams have had more time to improve their organisation and structure. 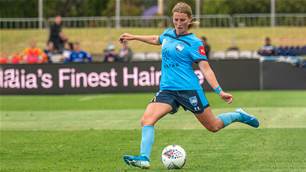