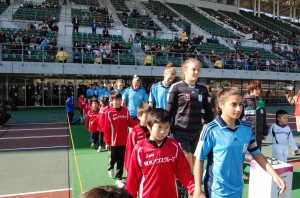 If Sydney FC and their fans were to be a honest, they didn't 100% believe they would be taking on Chelsea FC tonight in the semi finals of the International Women's Club Championships (IWCC).

Promoted and looking to be developed in the same vein as the FIFA World Club Championship, the Sky Blues were forced into a knock out qualification match, just to join the tournament, against Japanese side NTV Beleza, despite being the Australian champions.

NTV Beleza is a club of such strength that in the last 25 years it has captured 12 Nadeshiko Division 1 Championships and been runner up 11 times.  A club that contains World Cup winners Azusa Iwashimizu, Mizuho Sakaguchi, former AFC Player of the Year Natsuko Hara and an alternate for the silver medal winning London 2012 team Saori Ariyoshi. A club that counts World Cup winners Homare Sawa, Yuki Ogimi,  Aya Miyama and Shinobu Ohno as recent alumni.

NTV Beleza, like many of the Japanese club sides, play in the style reminiscent of Nadeshiko; possession based, highly technical, tempo based, incisive football.  Not only did Sydney FC match them, they defeated them 1 – 0.

And this was no plucky underdog defending for grim life before knicking a late goal and then holding on for dear life kind of win.  This ended up as a contest of equals where the "underdog" had real bite and could have scored two or three more goals.

Sydney matched the hosts intensity in the first half, withstood their attack and in stepped it up a notch in the second half to time and again pepper Beleza's goals.  Emma Kete's beautifully timed and executed 61st minute goal was all that Sydney deserved.

In attack they were the usually dynamic Sydney FC and in defence they were even better.  The new central defensive pairing of Anna Green and Alesha Clifford were impressive in squeezing the space for the Beleza attack and Casey Dumont demonstrated why the Australian game is richer for her return with a number of high class saves.

"The effort and discipline they put in to today's game was outstanding," said Stajcic.

''They [Beleza] were really well organised, well-disciplined and the girls showed they can match it with the best in the world,'' he said speaking to the Sydney Morning Herald.

The semi final is against Chelsea FC of the English FA Women's Super League.  A team that over the last couple of days have erroneously been underestimated.

The squad that coach Emma Hayes has assembled for the IWCC is not the same squad that struggled in the WSL and finished second last in the competition with only three wins.

Joining Arsenal and Liverpool in the arms race in 2014 will be Manchester City, who have already made their intentions known with a number of high profile acquisitions.

These changes have necessitated that Hayes and Chelsea spend the off-season recruiting strongly (seven players and counting) to counter the strengthening of their fellow big name rivals.

While savouring the high of their first win, match winning goal scorer Kete is under no illusions about the task ahead of them while going in with quiet confidence.

“We’re feeling pretty confident about our performance a couple of days ago but we know it’s going to be a tough game,” she said.

“We know what to expect whereas they might be a bit surprised.  We’re quite familiar with the shape they play and we know their personnel and their strengths and weaknesses.  We know how we can expose them and how they can be a threat."

“It’s always easier when you’re in season and have played a few games and had a few good wins. We’re fresh from our game so I think that’s an advantage for us, but they’re still a really tough team.”

Victory over the Blues would see the Sky Blues progress to the final on Sunday against either South Americans Colo Colo or the star studded current Japanese champions INAC Kobe Leonessa.

It would also be a triumph for long time Sydney FC coach Alen Stajcic.

The only coach left standing from the inaugural season of the W-League, Stajcic has been a fixture on the Australian women's football landscape from the days of the old WNSL to nurturing a large majority of our current Matildas through the Young Matildas and his two W-League championships with Sydney.

Never one to be characterised as "cute and cuddly", and in fact oft times cantankerous with an acerbic wit, the 40 year old has identified, guided and shaped the careers of Australia's brightest footballers and, for this current team, has worked tirelessly and thanklessly on the pitch and behind the scenes to bring them to this position.

“We celebrated the fact that the Westfield W-League is powerful, strong and an essential component of Australia's football landscape," said Stajcic of the win.

Still the only coach to lead an Australian women's youth team to the a FIFA youth World Cup from the AFC, Stajcic will hoping all his experience in the region can lead Sydney FC to claim yet another title.

Sydney FC take on Chelsea Ladies FC in the semi- final of the mobcast International Women’s Club Championship this evening with kick off 8:30pm AEDT.  Follow us on Twitter for all the updates of the match.