Sydney FC have got their title defence off to a good start | Credit: Getty Images 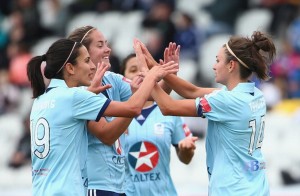 Sydney FC have got their title defence off to a good start | Credit: Getty Images

Sydney controlled proceedings after falling behind to Victory in the third minute, scoring five times to record a comfortable win.

The Victory started the brightest in the first quarter of an hour, pressing and disrupting Sydney’s rhythm forcing the Sky Blues to make mistakes.

Sydney however settled soon after and from then on dominated play, noticeably finding ascendancy through the middle of the field using a short passing game to great effect.

Soon after Melbourne’s Lisa De Vanna reminded all of her capabilities picking up the ball within her half before driving with pace and trickery past three opponents to force a fine save around the post from Casey Dumont.

After Victory's bright start, Sydney settled into the game and were back on level terms in the 18th minute when a corner was headed back across goal and eventually bundled over the line by Leena Khamis after Davey turned a second goal-bound header on to the crossbar.

Sydney asserted their authority on to the game and crisp short passing interplay through the middle of the park unlocked the Victory defence only for Sydney’s Jodie Taylor to be ruled offside as she rounded Davey to roll home into an empty net.

Sydney were not to be denied the lead for long when in the 21st minute a drilled cross from the left flank looped through the air to the far post from a deflection allowing an unmarked Nicola Bolger to volley home across her body.

After Khamis was denied by Davey and Harrison by the post from short passes through the middle, Sydney extended their lead in the 59th minute in a more direct fashion as Bolger’s quickly taken long free kick from the right flank was controlled at pace by Taylor, who had broken the Victory line before delicately lifting the ball over the onrushing Davey from the edge of the box.

In the 73rd minute any remaining doubt of the outcome of the game was swept away as Bolger added her second, volleying a rebounded ball into an empty net after a bungled save by Davey at Taylor’s feet.

To underline Sydney’s overall performance, substitute Emma Kete scored a fantastic volley in the 89th minute from the corner of the box which dipped over Davey into the top right corner at the near post.