A late equaliser from Jessica Fishlock has helped Melbourne Victory salvage a 1-1 draw with Sydney FC in a willing W-League encounter at Allianz Stadium. 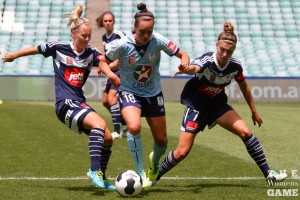 A late equaliser from Jessica Fishlock has helped Melbourne Victory salvage a 1-1 draw with Sydney FC in a willing W-League encounter at Allianz Stadium.

Melbourne dominated the opening half hour of the contest but it was the Sky Blues who opened the scoring with a goal to Emma Kete in the 33rd minute to lead 1-0 at the break.

The visitors continued to create the bulk of the chances but had to wait until the 81st minute to draw level when Fishlock slotted the equaliser past a helpless Casey Dumont.

The result sees the Victory move temporarily into top spot in the W-League ladder on 10 points, while the Sky Blues remain in fourth spot on seven points from three games.

Melbourne had the better of the early exchanges, with Sydney FC goal keeper Casey Dumont was called into action on several occasions.

Lisa De Vanna was the danger woman for the Victory, forcing three early saves from Dumont.

Victory keeper Brianna Davey was forced into action for the first time a minute later, diffusing a dangerous situation by diving on the loose ball to deny Caitlin Foord a shot on goal.

But the visitors kept pressing and came agonisingly close to scoring when Jessica Samuelsson's curling left-foot strike struck the post.

The Sky Blues made the most of their let-off in the 33rd minute when Kete scored from close range.

Foord hit the cross bar with a powerful strike but the ball fell to Kete who beat two defenders to the rebound and slotted the ball into the back of the net for a 1-0 lead.

Samantha Kerr thought she had scored two minutes later with a header from close range but was ruled offside by the assistant referee.

Dumont was called into action immediately at the resumption when she was forced to leave her penalty box to clear a dangerous pass.

Enza Barilla and De Vanna both forced saves from the Sky Blues custodian as the Victory continued to create the bulk of the chances without any reward.

Foord fired Sydney's first genuine shot of the second half on the hour but Davey made a sharp save.

The Victory's frustrations continued as Stephanie Catley just miss the target moments later before Laura Spiranovic had an air swing from close range.

But there was no denying Fishlock in the 81st minute.

Barilla received the ball in the penalty area and turned it inside for Fishlock who steadied before wrong footing Dumont with a classy finish for the equaliser.