In somewhat of a surprise result, the Australian Emeralds we’re defeated by World Cup newcomers the Dominican Republic in today’s action in Viera Florida.

The Dominican is a baseball hotspot that has produced numerous MLB all stars so it is no surprise to most that they would eventually embrace the Women's game and little doubt they would be competitive.

After Australia failed to score in the 1st, the hard throwing Brittany Hepburn took the mound for the Aussies. After a shaky start loading the bases without any outs, Hepburn recovered striking out the last three and limiting the damage to just one run.

The Emeralds got on the board in the 2nd and Hepburn steadied to close out the innings.

The bats came alive for the Aussies in the third and the runs flowed, opening up a 6-1 lead. Unfortunately, Hepburn’s radar was off and after loading the bases with a couple of hits, batters manager Simone Wearne was forced to go to the bullpen calling on 19 year old Abbey Kelly, hero of the last World Cup.

After a slow start Kelly induced a line drive double play to take the pressure off but a couple of uncharacteristic defensive blunders, a hit and a couple of free passes, Kelly was in turn relieved by Madison Tabrett who was able to close out the innings but not before the Dominicans had tied the score at 6.

From here on in the contest remained tight until the 6th innings when the Dominicans finally got ahold of Tabrett plating 3 runs on a couple of consecutive hits to take a 9-6 lead that would be the final result. 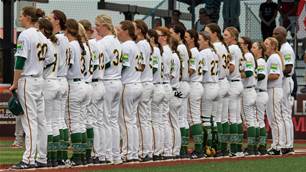