The Sunshine Coast Lightning have locked in a home 2019 Super Netball Grand Final, after downing the NSW Swifts 58 – 48 in Saturday’s major semi-final match.

It all began with Laura Langman taking a spectacular intercept within the first ten seconds, sending USC Stadium into pandemonium.

Being dubbed the Suncorp Super Netball Finals specialists, it was no surprise for the vivacious home crowd that their Sunshine Coast line-up played with conviction and class.

Whilst the Swifts looked on early, commanding most of play in the first half, the tides began to turn purple and yellow in the third quarter.

After banking an eight-point lead, the Lighting went into the final term looking equipped to be victorious.

Yet, the Swifts were valiant in their efforts, with both sides mostly going goal for goal until half time.

Cara Koenen was excellent for the home side, shooting at 93 percent, whilst Phumza Maweni played an impressive game in goal keeper, giving the Swifts shooters headaches in the ring.

Star Lightning centre and ‘Player of the Match,’ Laura Langman said her side revelled in front of their home crowd, despite a shaky start.

“It was a real game of two halves,” Langman said post-match.

“With all the top four sides, you don’t get a lot of opportunities to get ball, so when you do you have to make the most of it

“So, I thought everyone attacked and everyone defended tonight.”

Whilst Briony Akle attempted to create some connection by shuffling her line-up around, the Swifts struggled to move the ball efficiently and effectively, faced with a staunch Lightning defence.

The Sunshine Coast were sure to take advantage of any such turnovers, using their attacking pressure to convert their opponent’s blunders into goals.

The result will be an opportunity for the Swifts to reflect and improve before they face the winner of tomorrow’s semi-final between the Vixens and the Magpies.

Despite sacrificing an express pass to the Grand Final, next week’s game will be an opportunity for NSW to obtain more experience and momentum in high stakes matches – this may prove to be thoroughly beneficial if they progress to the premiership game.

Meanwhile, the Lightning looked primed to send off departing coach Noeline Taurua in style, in two weeks’ time, when they will host the pinnacle match of Suncorp Super Netball.

In pursuit of a three peat, if the Sunshine Coast maintain the mere brilliance displayed today, there is nothing they cannot do. 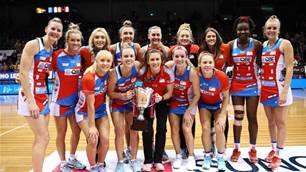 ANALYSIS: How the Swifts claimed their maiden Super Netball premiership