Pre-season. Whether professional or amateur, it's a word that causes a small feeling of dread in most athletes.

Pre-season. Whether professional or amateur, it's a word that causes a small feeling of dread in most athletes.

It's the work done when no-one is watching.

It's the work done in the gym, lifting weights, working on agility, speed work and cardiovascular endurance. It's the long, hard training that every soccer player goes through to play the full ninety-minutes.

Christine Nairn of the Melbourne Victory is no stranger to the hard work that goes into playing soccer at the professional level.

Nairn has spent the bulk of her 2015 playing for the Washington Spirit in the NWSL, with a season that goes from April to October. At season's end, Nairn didn't have much time before she headed to Australia for this year’s W-League season. For her, the choice is simple.

“My thought process is that I continue to maintain my fitness, instead of waiting for my body to get out of shape and then try and get it back into shape. I think it's easier that way for me.” Which translates to going straight from one season to the next with minimal downtown, however “everyone needs time to rest so at the end of the season I'll take about two weeks off, and get right back into it.”

This decision, is not one that Nairn arrived at easily. It has take years of working with her body, over many seasons to arrive at a combination of work, rest and cross-training that has allowed her to thrive as an athlete.

It's not enough to get out and work with the ball. The time without the ball, in the gym, on the field, that time is just as important. 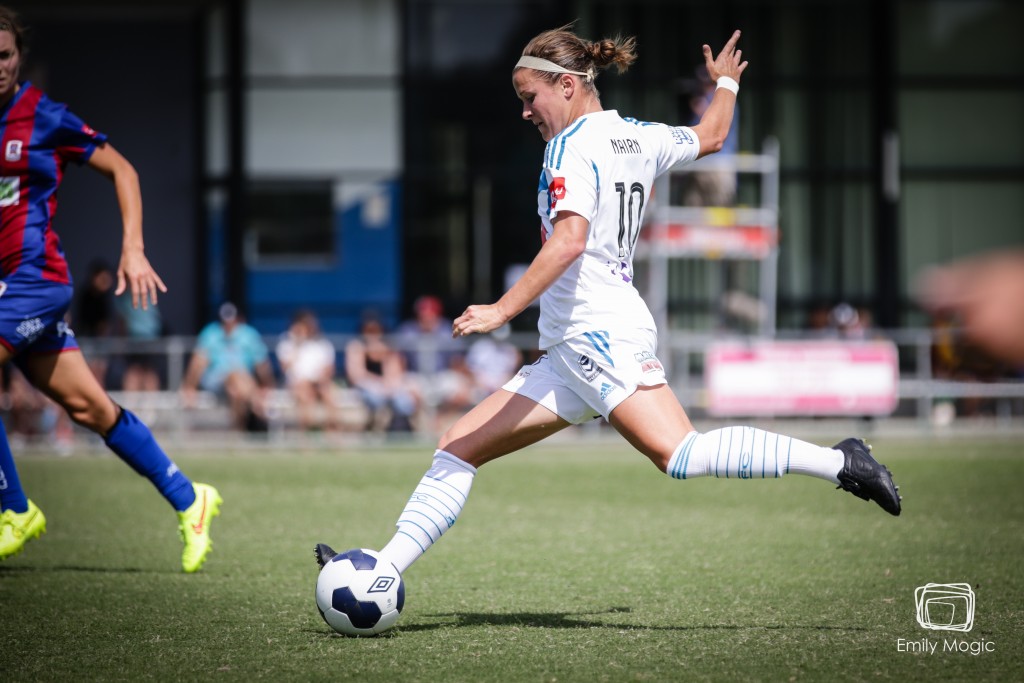 There's a fine line between working and overworking, and part of what Nairn receives at Victory, as well as the Spirit, is a level of customisation to workout plans.

“If you're playing ninety minutes game in and game out, you don't need a whole lot of extra fitness."

"The players that play don't necessarily have to do too much extra.”

This individualisation is incredibly important for a player to develop their bodies as best they can and also be proactive against injuries.

A unique way Nairn has worked at this, is by working with her brother.

He owns a Crossfit Gym in Maryland, and time and time against she's found herself his guinea pig.

She credits her brother and the programs her writes for her with maintaining her fitness and her interest in the gym side of things.

“Just, it's something different and it's so unique. I think that's why it's taken the country by storm. Every day is different and everyday you're going to use a muscle you didn't know you had.

"The way my brother has done it with me, is that he's taken me away from soccer. So if I'm feeling burnt out or just wanting something different and don't want to do work with a ball, he's the first person I go to.”

Playing world class football most of the year provides its challenges on the field and in the gym, however what the NWSL and the W-League bring to the table is something unique.

“I think that's what so great about both leagues, they are what you make it.”

And Nairn is certainly making the most of her time here in the W-League with days in the gym in the morning and hours spent practicing with the team in the evening.