The six and final round-robin match of the Commbank T20 Tri-Series will be taking place today, Sunday 9th February 2020. The match between Australia and England is a must-win match for the Southern Stars.

Last weekend’s actions left the three participating nations, India, England and Australia, with one win apiece. India beat England on the Friday.  England beat Australia on the Saturday in a Super Over.  Australia then beat India on Sunday.

England got a second win this Friday with a win over India.

England won the match by four wickets.  Entering their batting inning having to chase 123-6, the efforts of the English batters, notably Natalie Sciver who posted a half-century off 38 balls, saw them seal their second victory of the series with seven balls left.

India then won against Australia yesterday, on Saturday the 8th of February, 2020.  After Australia ended their batting innings with 5-173, in part due to a career-high 93 runs from Ashleigh Gardner, India put in a fantastic batting session of their own.

The chase was the third-highest run chase in T20 women’s international cricket history.  It is the highest successful one for the Indian women.  The guests won the match by seven wickets in a thrilling manner with three balls left.

This leaves Australia in a tough situation.  With England and India both on two wins, apiece the hosts are in a must-win situation for their match Sunday against the English.  The match will take place in front of a sold-out crowd at the Junction Oval in St Kilda, Victoria.

The final of the series will occur on Wednesday, also in St Kilda, between the top two ranked teams.

Should Australia lose they will have lost as many times in two weeks as they have had in the last two years.

Their current form is definitely a cause for concern, as it will give the Southern Stars only two more matches to iron out issues before the beginning of the T20 World Cup, taking place in Australia, later this month.

Final over = time for @EllyePerry to smack a six! 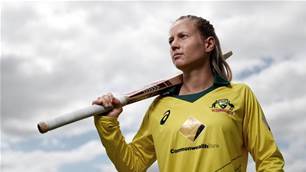