The hashtags for AFLW, HerStoryOurFuture and GenW are a veritable goldmine of reminders why the AFLW is awesome. To save you the effort of catching up on these, we’ve collated the best of social media for the last week which should be an ample dose of positivity to get you pumped for Round 4.

Perhaps our favourite internet moment this week is when Geelong welcomed their young Member of the Month to a training session, inspiring this adorable video. Emma is a young Cat in the making!

Fans don't come any bigger than young Emma, so we made her our @MomentumEnergy member of the month 🏃‍♀️#HerStoryOurFuture #WeAreGeelong pic.twitter.com/nUxYUlydoT

Running a close second is this tweet from @AFLAuskick celebrating inclusivity. The game is for everyone to enjoy.

Clare's son, Nathan, played at the @aflwomens NAB AFL Auskick Half-Time game last week. Clare shared his story; her son has mild cerebral palsy but he hasn't let that stop him. He had the most memorable experience celebrating his goal with other Auskickers.#NABAFLAuskick pic.twitter.com/cjj3gPbuaX

Also can’t go wrong with the highlights of the Rising Star mominees from the last round. Caitlin Greiser and Kalinda Howarth certainly made their presence known and we are keen to see what they’ll bring to their matches this weekend. Gold Coast Suns and St Kilda will both have their work cut out for them as they take on quality sides North Melbourne and Freo.

It's a Saint 😇 and a Sun ☀️ for the Round Three @NAB AFL Women's Rising Star nominations.

This reminder that footy is no longer a sport played by some and only watched by many is pretty special. The AFLW is encouraging a whole generation of young girls to pick up a football.

So proud to be an #AFLW Mum. So proud of my daughter and so thrilled that little girls think that it has always been this way and they can .... @NorthAFLW @aflwomens #GoRooGirls pic.twitter.com/YtAxvmQlnN

Greiser absolutely deserves to be featured once more in a great reminder that the AFLW is continuing to develop every year. It’s such a positive sign that the young players are bringing so much talent and energy to the game.

"Generation next" is kicking goals 👟🏉

Three rounds into the NAB #AFLW season, five of the top six goalkickers are under 21.

Dance into the weekend and the next round of footy. Akec Makur Chuot, Richmond Defender, has moves on and off the field. If the grand final had a half-time show, we know who’d be headlining. 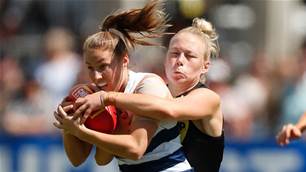