Injury. So often a part of sport, professional or otherwise and almost always challenging.

Matilda, Kyah Simon, has had more than her fair share, but her physical and mental resilience shines through in her relentless goal to be ready for the World Cup in France 2019. It’s bigger than a goal. It’s a dream.

“What makes a Matilda initially is a dream. It’s when you set a dream as a young girl playing a sport just for fun," she said.

“For me, and a lot of the girls in the Matildas' jersey now, it’s a childhood dream that we wanted to achieve at some point in our in our lives. When that dream comes true, it's just an absolute honour and a privilege to represent our country at the highest levels in the World Cup and Olympic Games. 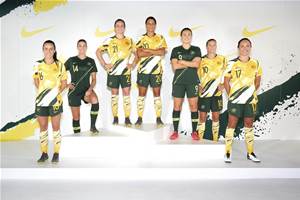 The Matildas are one of the most successful football teams in Australia’s history, if not the most successful. The journey has been full of hard work and determination, and now as they prepare for the momentous year ahead, they’ll be wearing their very own National Team Collection for the first time.

“Something that started out as just a passion and a love for the game, has turned into a full-time profession, an opportunity to live out our dreams and to be the best female footballers and role models as well."

Simon fully appreciates those who came before her, who paved the way for the Matildas of today and tomorrow.

“Every member of the Matildas, from cap one [Julie Dolan] all the way up to cap 202 [Mary Fowler] has given something to football," she said.

“I was lucky enough to come in 11 years ago into the Matildas [cap 157] and be a part of an era with Cheryl Salisbury and Di Alagich. That was really eye-opening for me as a 16 year old and be playing with amazing role models and the most amazing footballers as well."

For Simon, to see where the game was back then, to where it is now, it’s humbling.

“I'm really grateful for what they've done for the sport. It wouldn't be in the position that it is and for all the fights that they had to go through. They were really the pioneers of the sport. And we're starting to reap some of those benefits of being a part of the legacy that they left. It's up to us now to take that forward, to leave a legacy and be pioneers for the next generations to come through."

A legacy which sees the Matildas currently ranked sixth in the world in a sport which is the most popular team participation sport for kids in Australia. Simon’s legacy is part of that, but it’s also something bigger.

“I think I'd be downplaying if I said I have had it easy throughout my career. At 27 years of age, I've had my fair share of injuries and setbacks. Four major surgeries, so I have definitely had a bad run over the last three or four years.”

“The legacy I want to leave is to be a positive role model for young girls out there. But also, to set an example that it's not always rainbows and butterflies.

“It's sometimes hard, and you're in some of the biggest lows of your life. But I think when you look back to where you are, playing for your country at a World Cup and an Olympic Games, all of that sacrifice and hard work, it's all worthwhile and it takes a little resilience to get through setbacks and injuries.

“That's the biggest legacy that I want to leave. I just want to be an example that even if you have setbacks, that you can bounce back, and it's up to you, as an individual to get yourself back and believe in yourself at the end of the day.”