Most of Collingwood’s side is relatively young, but does show promise.

Their defence has upheld, because even though they didn’t win that many games, in their AFLW season, their defence was a standout.

With Cross coder and All Australian Ashleigh Brazil, Sophie Casey and Stacey Livingstone, being key pillars in the Pies defence, and with Chloe Molloy potentially spending time down back, it’s going to be no easy task for the oppositions' forward lines to crack.

A wise person once said that defence wins you premierships, and the Pies showed that in their VFLW campaign, and they did that without cross-code superstar Ash Brazil.

Their young list is also one of their strengths, you could see in glimpses of last season that there is some talent there, and with a little more time in the system, they can turn into future stars of the game.

With the gaps left by the departing players, the younger players such as Maddie Shelvin, Sophie Alexander and Sarah Dargan, just to name a few, absolutely stepped up and for Collingwood fans they showed real promise: how there is an exciting future ahead for Collingwood.

"I think for a new person coming in, the obvious thing would be to hopefully be a bit more successful in terms of the win-to-loss ratio, we obviously didn't do the girls last year proud. We probably didn't have the season they wanted.

"In terms of where they ended up on the ladder and whatnot. And that's not always going to be all and end all, but yeah I think it's just getting that confidence back in.

"That belief that, you know, we can win games going into this season and so there's some really good talent on the list. That feeling that we can actually compete in and beat anyone we come up against."

One player to watch

The recent Collingwood draftee has a lot of promise, seeing some of her highlights from her time at NT Thunder she is one of those players that can win you a game and turn something out of nothing.

Her speed and agility can allow her break out of packs, and storm into the forward 50. Combine that with the promise that Sarah Rowe showed last season and with her speed, Machaelia could turn the Pies into a team that the opposition can’t catch.

“Michaela Roberts, who's actually from the Northern Territory, she's coming in and yeah she's just very composed and we can say that she's yeah she's got a bit of an X factor to her.

"Maybe keep an eye out for her I think, when she's on the field, she’s pretty cool to watch.” 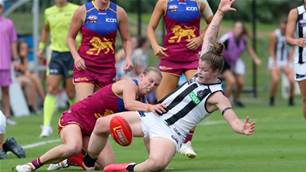