As Tameka Butt steps out onto the field this afternoon, she will become only the fourth player in the 10 seasons of the W-League to make 100 appearances for one club.

As Tameka Butt steps out onto the field this afternoon, she will become only the fourth player in the 10 seasons of the W-League to make 100 appearances for one club.

It has been 10 years in the making for one of the most decorated and understated players in the W-League and she could not be more excited for the game.

“I’ve been waiting a long time for this, 10 years in the making and honored to do it with Brisbane,” she said

At the age of 17, Butt took to the field alongside current teammate, Clare Polkinghorne, in the then Queensland Roar squad during the inaugural season of the W-League in 2008.

In her first season, she scored five goals including an all-important penalty in the shootout against Sydney FC in the semi-final before scoring a goal in the Grand Final against Canberra United to give Queensland Roar their very first W-League Championship/Premiership double while also becoming the inaugural champions. 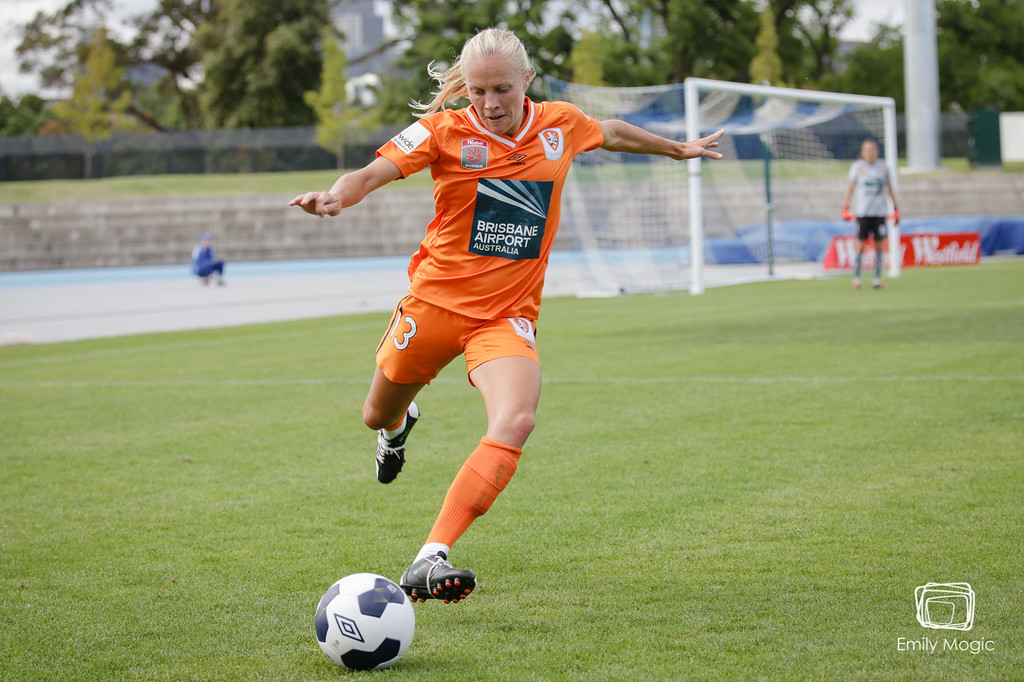 As one of The Originals - a handful of players who have run out for every season of the W-League, Butt has seen the league's evolution first hand.  While supporters, players, and coaches may not have seen the leaps and bounds they have wanted to after 10 seasons, it is the little things that count.

“I think I was just stoked to have a national league and be able to play against players from around Australia,” Butt said.

“To see it grow to what it is today, the professionalism and the players we attract from overseas is great.”

Not only will she have 100 W-League games to her name but she could become the first 100 club player to reach 50 goals. Butt currently sits on 48 goals behind Matildas teammate Michelle Heyman.

In the future, Butt is hoping the W-League can emulate the current NWSL where they have full rounds but she also wants to see 10 to 12 teams across Australia competing in the W-League in 10 years time.

“It would be amazing and I see myself sitting back and watching it all,” she said.

Brisbane Roar face Adelaide United at 4:20pm (AEST or 5:20pm AEDT) at Suncorp Stadium in the Round 4 double-header clash.

Catch it live on SBS Viceland and FoxSports 501.

- 80.0%: is Adelaide United Eliza Campbell's saves to shots percentage with the custodian making  a league leading 12 saves in two matches.  After two seasons away from the W-League in the Norwegian league, the 22 year old returned last season and was one of the more impressive goalkeepers.  It is unsurprising therefore that Campbell was this week called up to her first senior Matildas squad to face China next week.

- 56: In terms of titles and silverware, Canberra United and Brisbane Roar are already two the W-League's most successful club.  But last week, with their wins, the two clubs joined Sydney FC on top of the all time W-League wins table.

- 0: Speaking of Sydney FC, it has been a dismal start with the Sky Blues producing their worst start to a season.  Last week against Canberra United, Ante Juric's side for large parts of the game were on top but were unable to come away with any points.  The task doesn't get easier this week when they meet the two time defending champions Melbourne City.

- On of the bug bears of many fans in the W-League is the lack of kits available for purchase.  This season there seems to have been an effort from one or two clubs to have jersey's available.  Canberra United of course have been the leaders for many season but this year it is great to see Perth Glory selling their W-League team kits on their Club online store, including an option to personalise.

- NWSL watch: In Round 2 we saw a hattrick from Rachel Hill and in Round 3 her team was on the receiving end of a hattrick with Makenzy Doniak (North Caroline Courage) proving the difference in the clash between Adelaide United and Perth Glory.  Newcastle Jets' Katie Stengel (Boston Breakers) also netted multiple goals with her brace in the Jets' heavy loss and in the same game Jess Fishlock (Seattle Reign) netted a classy double to help Melbourne City to their victory.  Meanwhile defenders were also getting in on the goalscoring action this week with Brisbane Roar's Carson Pickett (Seattle Reign) and Canberra United's Toni Pressley (Orlando Pride) both getting on the board.