Every now and then when you watch a game there is a moment that makes you sit up and take notice. A moment that is truly exciting.

Every now and then when you watch a game there is a moment that makes you sit up and take notice. A moment that is truly exciting.

In Round 2 of the W-League, for me that moment was when Melbourne Victory attacker Kyra Cooney-Cross made the decision to take on experienced Matildas defender Alanna Kennedy.  The Victorian accelerated passed Kennedy before being dragged back slightly on her shot.

What added to the thrill was that it was just 15 year old Cooney-Cross' second W-League match.

That excitement about a new young talent arriving on the scene lasted even past the post match interview where the clearly shy youngster tried to express her thoughts in front of a national audience.

In that fog of excitement, I missed something crucial.

"It’s been really hard for training five times a week,” Cooney-Cross told Fox Sports. “Missing out on school, it’s hard for me to catch up."

Those two sentences were telling and, for another season, raised some questions.

The W-League has always had young players.  Just listen to the debut ages of some Matildas mainstays including Sam Kerr, Caitlin Foord, Steph Catley, Katrina Gorry and Alanna Kennedy.

However, with the much welcomed increasing professionalism required to play the W-League and the visibly improved pace and speed of the league, there has to be a concern about young players entering the game.

So I spoke to a long time youth coach - who preferred to remain unnamed - with over 20 years experience in developing young footballers.

"It is undeniable that the W-League is a great nursery to get our younger players to have a taste and the experience of football in a high performance environment," they said.

"It is a real opportunity to blood them and give them a taste of what is required for the next level."

"However, and this is the key point, it is all about managing those players; managing their load physically, their emotional and mental development."

Physically getting it wrong can cause long term detriment.  The teen years are a period of physical growth where there are significant energy demands on the body.  If a player is being over-trained, research shows that the energy that would go into growth is expended and can lead to stunted growth.

"There is no room for ignorance when you are talking about the well-being of kids."

"It is not possible that 15 year old kids can train 5 days a week and then play 90 minutes every week as a fully-fledged Matilda at 26."

For a teenage girl undergoing puberty, the physical ramifications of getting it wrong include higher prevalence of soft tissue and overuse injuries, muscle damage, prolonged fatigue, a diverse consequences of stress hormone responses and, of course, burnout.

"We don't have enough good players in this country that we can continue to burn them out physically and mentally."

"That's not to say that they shouldn't be training in that high performance environment but again it is about management."

Take, for example, some of the teen players at Canberra United last season.  The coaching staff at the 2016/17 premiership winners slowly eased in a host of young players including Laura Hughes, Clare Hunt and Karly Roestbakken.

Even those players that had significant minutes like Grace Maher and Nikki Flannery were rotated in and out of the squad according to how their bodies were responding to the daily grind.

Speaking to break out star and key midfielder Maher last year, she spoke about nights off from training and time away from the game to be with family and friends, essentially to just be a child. 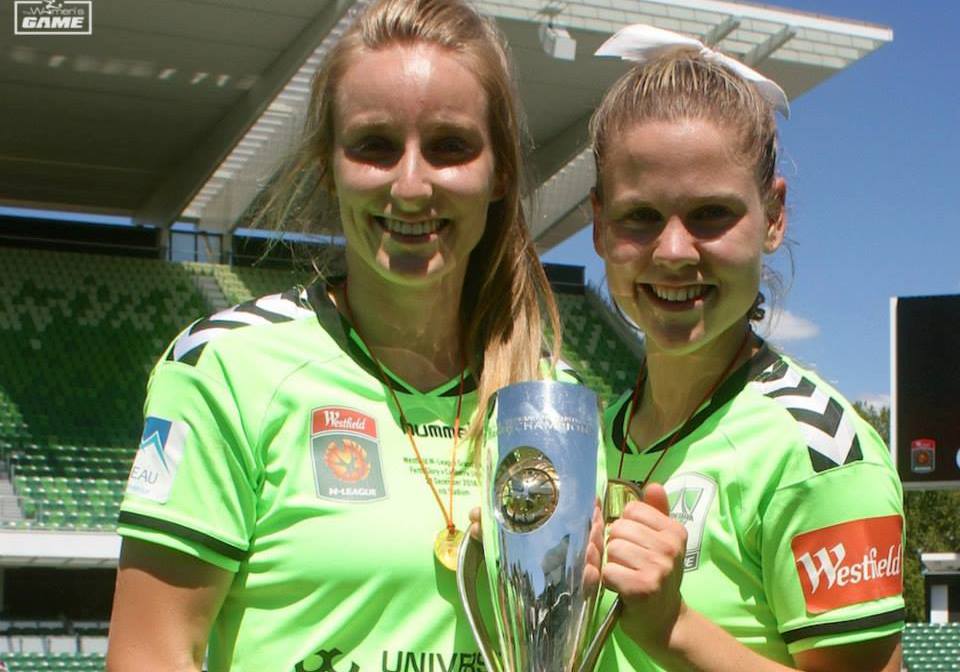 And those moments of childhood are important, almost critical to retaining players in the future.

"If young players are committed to the same training patterns and play the same minutes as veteran players then those kids will burn out and fall out of love with the sport."

Falling out of love with football is a tale old as time in Australia. We have seen the likes of Sally Shipard (who eventually returned to the sport), Nicole Begg (nee Sykes), Caitlin Friend, Linda O'Neill, and Canberra trio Sally Rojahn, Grace Field and Meg McLaughlin all step away from the game at relatively young ages.

Statistically, Australian (Matildas) players retire at an earlier age then many of their counterparts in the top 10.  Lisa De Vanna is currently the oldest Matilda at 33 (sorry Lisa!) and is the only player in their 30s.

Compare that to the United States with 5 players in their 30s, Germany (3) who are rebuilding after another 3 players in their 30s recently retired, England (7),  France and Canada (3) after recent retirees and Japan (2) who are undergoing a significant rebuild after their World Cup stars also retired in the past 12 months.

Keeping players into their early 30s has been difficult for the Matildas due to pay and, many former players will tell you, starting their careers early with their bodies shot by their late 20s.

It is a situation that has been replicated in the W-League and exacerbated by the pay and conditions issues that arose in the league and is finally being addressed.

Again, compare that to the United States where their players enter the professional ranks in the early 20s.  Melbourne City forward Ashley Hatch was named the NWSL Rookie of the Year and she is seven years older than Cooney-Cross in her semi professional first season.

Then there is the question of whether specialisation should be occurring this early anyway.  One vocal critic has been former Matildas midfielder Joey Peters - a player who represented Australia at an early age.

The literature on specialisation is interesting.  In a 2013 journal article entitled "Sports Specialization in Young Athletes; Evidence-Based Recommendations", the authors - which included two medical doctors, a PHD and Masters - found that early specialisation may be harmful to young athletes.

They concluded that: "Some degree of sports specialization is necessary to develop elite-level skill development. However, for most sports, such intense training in a single sport to the exclusion of others should be delayed until late adolescence to optimize success while minimizing injury, psychological stress, and burnout."

"For most sports, there is no evidence that intense training and specialization before puberty are necessary to achieve elite status."

Early specialisation can also mean harming the young athletes ability to develop skills in their chosen sport.  It is no coincidence that many of the current crop of Matildas played a number of different sports growing up from AFL, cricket, basketball, athletics, netball, surf life saving, rugby league and touch football, to name a few.

The authors follow up journal article even addressed this idea of the development of skills through multiple sports.  In their 2016 article entitled "Sports Specialization, Part II: Alternative Solutions to Early Sport Specialization in Youth Athletes" they further concluded:

"Based on the current evidence, parents and educators should help provide opportunities for free unstructured play to improve motor skill development and youth should be encouraged to participate in a variety of sports during their growing years to influence the development of diverse motor skills.

For those children who do choose to specialize in a single sport, periods of intense training and specialized sport activities should be closely monitored for indicators of burnout, overuse injury, or potential decrements in performance due to overtraining."

In a vacuum it all sounds simple but the reality is developing young athletes is complex and highly individualised.

What works for one person might not work for some-one else and then there is the drive of the young athlete themselves.

One recent example has been Matildas and Canberra United defender Ellie Carpenter.  In a piece published on The Players Voice, Carpenter herself addressed some of the comments that have been aimed her way during her rapid rise to the Matildas.

"I still hear and see a few comments from people saying I should be preserved and not exposed to this level of football too early because they think I’m not ready for it, I might break down, or they should look at using the more experienced players. That sort of stuff."

"I’m sure it would’ve been nice to do a few more of those normal things, but I’m not sad about it. I don’t have any regrets. The alternative is pretty good. It’s great, actually. I’m happy playing football. I wouldn’t want it any other way."

So what is the answer?

Again the development coach stressed the need for balance.

"It is important that the kids are getting an opportunity to thrive but it is about managing them properly."

"That is where the parents need to be a part of the discussion.  They have to have the right support around their schooling and having a balanced life outside of football."

"Let them have nights away from the training environment. Let them have fun, be a teenager sometimes, just be a kid."

On the park, the W-League has had 10 seasons of experimentation to see what works and what is best practice to allow for the protection of young players and ultimately their longevity.

20 years ago, even 10 years ago, there was a lack of research and education in this area but now it is available everywhere.  To paraphrase the coach, there is no longer any room for ignorance.

This might be one area where Professional Footballers Australia and the FFA Coaching Education directors can come together and prepare a "best practice" manual.  A guide for coaches with the best sports science and periodisation information and to also allow the young players to be monitored when they are away from their W-League clubs.

Maybe it might be time to have a look at rebuilding the elite pathway to not depend considerably on the W-League for the development of players.

With approximately 50 - 60 kids under 16 within the elite system it is actually in Australia's best interests to get it right so the baton can be passed on from a De Vanna to a Cooney-Cross.

This season the W-League gets access to some sweet, sweet Opta stats so look out for them over the weeks.

- 26.7%: is the conversion rate for Perth Glory this season, the highest in the league

- 54: Melbourne City have surprisingly gone down the aerial route most often with 54 crosses however they have had the second worst accuracy of 14.8%

- Surprisingly in a football match, it was a bad week for arms in the Brisbane Roar v Perth Glory clash.  Glory midfielder Nikki Stanton was subbed out with a broken arm while Roar midfielder Celeste Boureille also received treatment for her arm, as did defender Kaitlin Torpey

- NWSL watch: For years fans of the W-League and the NWSL have been waiting for the two leagues to make it Facebook Official but in the meantime players from the opposite league continue to make their mark.  Round 2 had a very NWSL flavour to the scoring with Rebekah Stott (Seattle Reign), Lo'eau LaBonta (FC Kansas City), Makenzy Doniak (North Carolina Courage), Arin Gilliland (Chicago Red Stars), Rachel Hill (Orlando Pride) and Sam Kerr (Sky Blue FC) scoring 8 of the 11 goals in the round

Canberra keen to back up five-goal A-League thumping