Sermanni set to announced the new coach of the USWNT 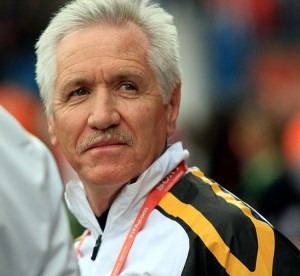 Sermanni set to announced the new coach of the USWNT

TWG has been informed that Matildas coach Tom Sermanni is set to be announced as the new coach of the recent gold medal winning US Women's National Team.

It is believed that the announcement will be made in the next day or so with Sermanni set to finish up at the end of November, making the East Asia Cup qualifying his last tournament in charge before taking up his new position.

If officially confirmed, it would be the end of an era in Australian women's football.  58 year old Sermanni has been the national team Head Coach since 2004, after returning to the post he left in 1997.

The jovial Scotsman has overseen a transformation of the women's game in Australia from grassroots to the elite level.  On the international stage the Matildas have improved to become a respected Top 10 side (currently at all time high of 9) and have qualified for the knock out stage at the last two World Cups.

Since the scheduled departure of Pia Sundhage, speculation has been rife as to the identity of coach of the World No.1 team with Sermanni a name mentioned near the top of the list of candidates.

During his recent visit to the United States with the Matildas, Sermanni was asked about the job by a NBC commentator to which he replied.

"Obviously the US job is the biggest job in women's so for anyone to say they are not interested, you know, would be a little bit false."

Sermanni would be no stranger to the US women's football scene having been an assistant coach at the CyberRays (including Brandi Chastain and Tisha Venturini) and head coach of the New York Power (with Tiffeny Mibrett, Christie Rampone and Shannon Boxx) in the fomer WUSA.

He is also no stranger to the USSF coach recruitment process after being one of the top candidates for the position back in 2007 prior to the appointment of Sundhage.  Back then the Recruitment Committee that rated Sermanni highly consisted of US Soccer President Sunil Gulati, U.S. Soccer CEO Dan Flynn and former player Mia Hamm; with the same three on the Committee again this time round.

A highly regarded coach, Sermanni was a nominee for FIFA Coach of the Year in 2011 and his appointment would seen him beat out recent U20 World Cup winning coach Steve Swanson and the oft championed Paul Riley.

It appears the US Soccer Federation liked what they saw.

For Australia's sake, we hope this is not the case!

The FFA this morning released a statement confirming the departure of Tom Sermanni.

Here it is in its entirety.

Football Federation Australia (FFA) today confirmed that Tom Sermanni has resigned as the Westfield Matildas Head Coach to take up the position as the new Head Coach of the United States Women’s National Team. Sermanni will finish his duties with the Westfield Matildas at the end of November 2012 and will start in his new position on 1 January 2013.

The decision to leave the team that he had coached for the past eight years was not an easy one for Sermanni to make, but when the opportunity to coach the number one ranked team in Women’s Football came up, it was a challenge that he wanted to accept.

“From a personal perspective, this was definitely not an easy decision to make and, in the end, it became quite an emotional one for me,” said Sermanni.

“In football, and in life, it’s all about timing, and with Australian Women’s football quite settled at the moment with the National Teams and the Westfield W-League, the timing of this challenge to coach the number one Women’s football team in the world was at the right time for me to accept.

“There is plenty of great talent coming through the Australian Women’s football system and in the coming years I am confident that Australia will be a world force.

“But eight years is a long time for any coach to be in a position and now seems to be a good time to bring in some new ideas and energy into the Westfield Matildas set-up.

“Undoubtedly, I had the best football coaching job in Australia with great support from FFA & the AIS, fantastic, dedicated and professional staff, full support from the club, State & Territory program coaches and a group of players that have been a joy to work with.

“I have many fond memories of my time with the Westfield Matildas and having spent the majority of the past thirty years in Australia, they will not be too far away from my thoughts,” concluded Sermanni.

Football Federation Australia CEO, Ben Buckley, paid tribute to Sermanni and although disappointed with his decision to leave the Westfield Matildas wished him all the best for his new position.

“Tom Sermanni is a true gentleman of our sport and will be missed by all who have had the pleasure to have worked with him,” said Buckley

“When Tom tendered his resignation our immediate reaction was sadness that he would no longer be coaching the Westfield Matildas, but we understand the motivation behind his decision and wish him all the best for his new challenge ahead with the U.S. Women’s National Team.

“Tom’s legacy for Women’s Football in Australia will be felt for many years to come as he has helped transform our Women’s national team to a very professional and competitive group of players.

“Tom will always be considered a close friend of Australian football no matter where he is in the world,” concluded Buckley.

Likewise, Australian Institute of Sport (AIS) director Matt Favier said few people have had such an impact on elite women’s football in Australia as Sermanni dating back to the mid 1990s when he coached the Matildas to qualification for their first World Cup in 1995.

“Tom has made an indelible mark on women’s football in Australia and I would like to thank him for his contribution to both the Matildas and the AIS program over many years,” said Favier.

“We have been lucky to have a person of Tom’s standing and passion involved in football for such a long time and we wish him all the best in his new role,” concluded Favier

Sermanni's second stint as the Westfield Matildas head coach began in 2005 and during his 8-year tenure he oversaw two successful FIFA Women’s World Cup campaigns in 2007 & 2011 where the Westfield Matildas made the quarter-finals stage on both occasions, an AFC Women’s Asian Cup Championship in 2010 and helped Australia’s Women’s World Ranking climb to their highest ever position of 9th (September 2010 & August 2012). Sermanni was also named the AFC Coach of the Year in 2007.

Sermanni is no stranger to US Women’s Football having previously coached the San Jose CyberRays and New York Power in the WUSA from 2001-2003. Sermanni will replace Pia Sundhage who coached the U.S. Women’s National Team from 2008-2012.

Sermanni’s final coaching duties with the Westfield Matildas will be the East Asian Football Federation East Asian Cup Qualification tournament which will be held in Shenzen, China PR from 20-24 November 2012.