Sydney FC head down the Hume Highway to Canberra on Sunday carrying the proud banner of being the only team in the W-League to have made every semi-final round in the competition.

Sydney FC head down the Hume Highway to Canberra on Sunday carrying the proud banner of being the only team in the W-League to have made every semi-final round in the competition.

And they are riding the wave of seriously challenging Melbourne City last round, perhaps the first side to really do so throughout an entire match this season.

It was a far cry from the opening to their season when the Sky Blues were left in the dust behind the rest of the pack after after copping a 6-0 loss to red hot debutants Melbourne City, and 3-0 to the champions Canberra United.

But they are a professional outfit, and they worked their way back into finals contention with a steady set of wins over Western Sydney Wanderers, Adelaide United and Perth Glory.

They stumbled to a narrow loss against Canberra United at home, but perhaps their biggest wake up call following the opening rounds was a 3-0 annihilation by Brisbane Roar in December. Sydney FC looked lacklustre, unable to connect passes, and without intent to score. The match gave Brisbane Roar the taste of success they needed to kick on and make a run at the top four which they made, just, last weekend.

It was Sydney FC’s victory over the Newcastle Jets in January that propelled the Sky Blues into the semi finals, keeping the Jets teetering on the edge of the four, with Adelaide United coming ever so close but slipping at the business end.

Sydney FC enter this round with a stream of confidence they haven’t enjoyed all season, off the back of the Jets win and a narrow loss to Melbourne City that by all accounts, felt like a win.

Kyah Simon spoke to Sydney FC’s website team after the loss: “We have taken a lot of confidence away from our performance against Melbourne City. It is the first time that we have really played to our potential.

“We walked away from that match with our heads held high, and take a lot of confidence going from that into our semi against Canberra.  We are feeling confident at the moment, and ready for the challenge ahead.

“It was funny because on the weekend it brought back a lot of memories of the last time we took out a Grand Final (in 2013). How joyful and happy we were, and proud of ourselves as a team.

“That was exciting in itself, and has added an extra bit of hunger to experience that again.  If we can do that again it would be a massive achievement for the team and the Sydney FC club.”

There is daylight between Sydney and Canberra in the stats with Sydney scoring only 15 goals and conceding 21, while Canberra scored 26 and dropped 8.

Winning just half of the matches they played this season, it’s the right time for Sydney FC to be striking a hot patch, and they’ll be hoping it translates in the nation’s capital this weekend.

Their lack of goals despite the high calibre strike force of Kyah Simon and US import Jasmyne Spencer has been a weakness, with only Leena Khamis consistently breaching defences.

Sydney haven’t yet managed to score past Canberra’s line this year, clean sheets prized as highly as goals this season by this week’s home team that is putting all their energy in becoming the first back-to-back title winners in the league.

At the other end, Sydney FC have suffered blow outs against each of their fellow finalists, leaking 9 goals in the first two rounds to Melbourne City and Canberra, and another 3 against Brisbane Roar late in the season.

Last season, Sydney FC’s attack was accused of appearing lacklustre in high profile fixtures and the defence encountering off days against their fellow 2014 semi-finalists. Sydney FC were bundled out of last year’s finals by Perth Glory. They won’t want history to repeat this season. 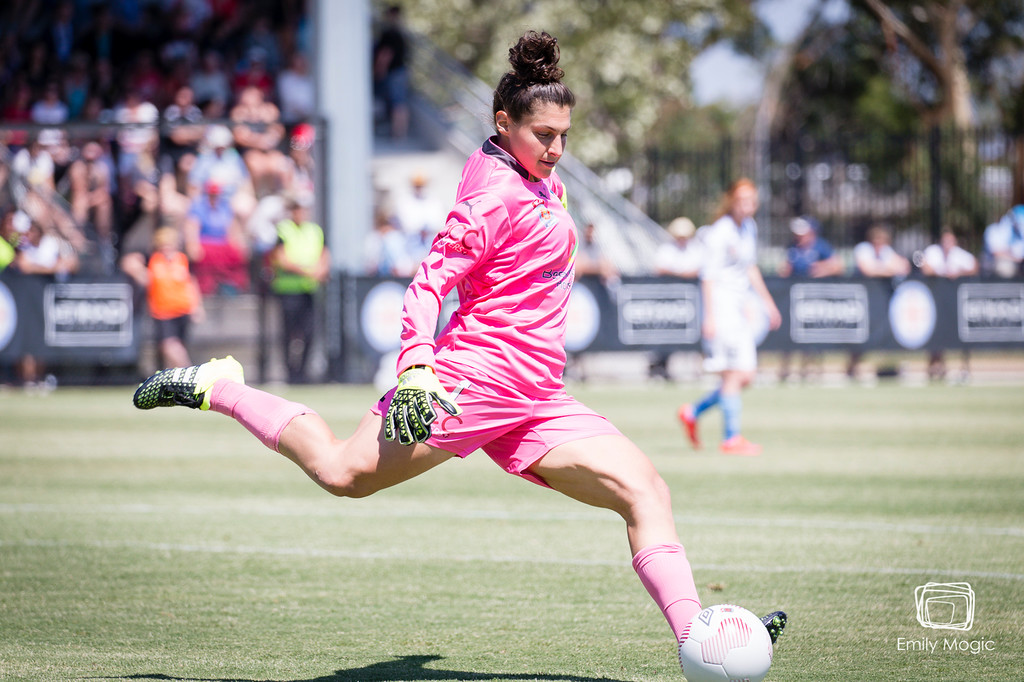 The USA’s National Women’s Soccer League’s (NWSL) 2015 Goal Keeper of the Year, Michelle Betos, landed with a thud in Australia with a load of goals from Melbourne City and Canberra United to contemplate. She has settled in nicely since then, performing strongly through the rest of the season.

Betos certainly knows how to perform on big occasions, having played for high profile clubs Seattle Reign and Portland Thorns. Canberra will have to keep a close eye on Betos in dead ball plays – this header off a corner from Betos in stoppage time against eventual NWSL champions FC Kansas City is a (magnificent) case in point https://www.youtube.com/watch?v=8EgNf0tCnuQ 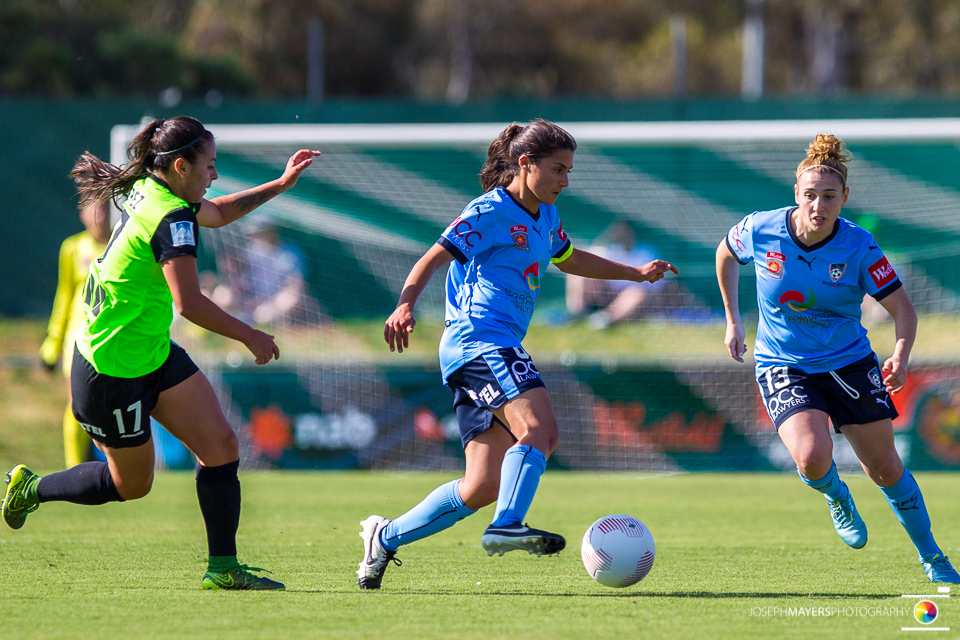 Sydney FC lost the midfield battle the last time they met, so Teresa Polias will be looking to flip the result.

It is Midfielder T who is the heart and soul of this Sydney FC side, and when she is on song, she can be the connector that unleashes Sydney FC’s strikeforce

Still without a goal to her name in the W-League, the whole stadium might just erupt if the little general can sneak one past Lydia Williams. 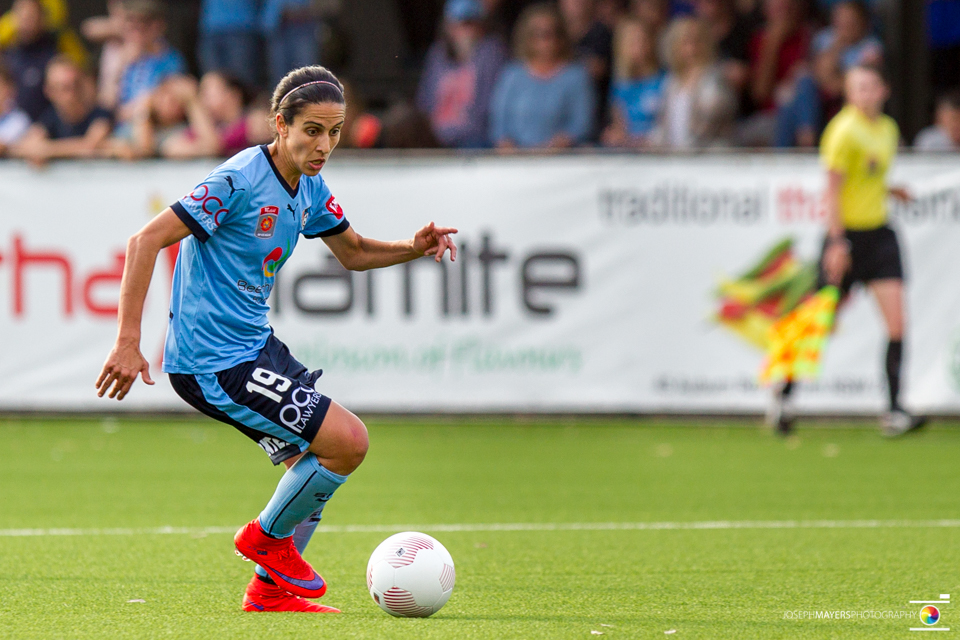 The biggest threat for Sydney FC this season, and since the inception of the W-League, has been Leena Khamis. The 29-year-old is a smart veteran currently sits on fourth in the All-time leading goalscorers table,

Her dynamic running, lightning quick reflexes and passion in front of goals makes her an unpredictable danger that the Canberra United defence will need to be prepared for.