It is something which has been easy to forget in a season that saw Perth Glory streak away to become out –and-out premiers this season.

Victory started the season with a shock loss to Newcastle Jets, and without knowing how much the Jets had improved in the off-season we all questioned how the champions would defend their title without the likes of internationals Jessica Fishlock and Katie Hoyle.

As in their championship season the first round loss was a wake call for the Victory under new coach Joe Montemurro.

It wasn’t long before US imports Christine Nairn, Lauren Barnes and Ellie Reed, stepping fresh off the plane, joined the fold and to deliver quality football, helping Melbourne take points.

Victory then went on their now traditional unbeaten streak, going 5 matches without a loss picking up 11 of 15 points.

That buffer was needed as they were to stumble mid season with three losses in a row, including one to their semi final opponents.

The ship was righted towards the end of the season with the champions ensuring they would get the chance to defend their title.

Melbourne’s kryptonite might just be as a result of their success. Their extended break, which included an appearance in the World Club Championships, ending in a hefty loss 5-0 loss against Okayama Yunogo Belle will have some impact.

Either it will have assisted their resolve to retain their title, or perhaps shaken their momentum into the final series which was in good form in their last appearance with a 4-0 win over Newcastle United in their last regular match of the season.

Formation wise the Victory have been susceptible to being dominated in the midfield leaving the forward isolated. The last three weeks of the season they appeared to have addressed that issue with the midfield and forwardline combining nicely resulting in 10 goals in three games.

Either way, Melbourne Victory is always one of Canberra United’s trickiest opponents. In previous seasons it was Fishlock popping in a late goal here or there. This season it was De Vanna cheekily sneaking one over the top of Jones at the top of the box. Canberra United will need to be in form all over the park to take the points in this semi final and earn a grand final appearance from third place.

Catley has really become one of the most dependable yet versatile defenders in Australian football. Rarely beaten on a one-on-one basis, Catley’s defensive abilities are usually overlooked for the attacking threat she can also pose. This season she has been the one constant where there have been changes through injuries, form and suspension. 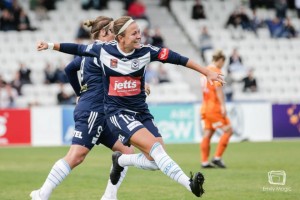 The shoes of Fishlock were big ones to fill and Nairn has done so with aplomb. The midfielder has the enviable quality of always appearing to have time on the ball and usually picking a pass to either De Vanna or Quigley.

In particular her match ups with Washington Spirit team mate Lori Lindsey were a feature of both games between Melbourne Victory and Canberra United this season.

Lisa De Vanna continues to haunt Canberra. She has not scored as many goals this season as she might have in previous episodes, but her play off the ball has caused plenty of pain as others line up to benefit from her drawing players, plural, wherever she runs.

Rachel Quigley is another danger player for Melbourne Victory. She has the ability to sweep a deft chip over the defence, volley cleanly, or take it to the line to strike it past a diving keeper. She has shown herself a handy striker in recent years for Adelaide United, but this year has made a name for herself on the national stage, playing finisher to De Vanna’s provider role.

* Catch all the action Live at 3.00pm nationally on ABC TV. Or from Monday on ABC iView with a full replay at 3.30am on Tuesday.

** Listen LIVE on FFV Radio from 2.30pm. Head to http://www.footballfedvic.com.au/news-media/ffv-radio/ or search 'FFV Radio' in the TuneIn smartphone app.