Last year’s grand finalists Melbourne Victory were the team to watch in the 2013/14 W-league season.

Word also spread quickly that last season’s superstar midfielder Welsh international Jess Fishlock would be spending most of the season on the park rather than her previous short-term guest stint.

Then Melbourne opened their season with a 5-1 loss to Sydney FC and eyebrows were raised.

It had been a number of seasons since Melbourne had conceded so many goals in one game and the standard of their pre-season preparation was cast in doubt.

Concerns were quickly quelled however when Melbourne followed the loss with six solid wins including a 2-1 defeat of eventual Premiers Canberra United. Only a draw to Sydney FC breaking their winning streak.

The mid-season performance of Victory was eye-catching and the finals race became less of a “Will They?” to more of a “Where Will They?” settle in the final Top 4.

Victory were well-placed to eye-off the Premiership until a slippery finish - which included a draw to Western Sydney Wanderers and two consecutive 1-0 losses to Perth Glory and Brisbane Roar respectively – left the Melbourne side at a respectable 3rd place on goal difference.

Melbourne Victory have a hard task in front of them to get past seasoned finalists Sydney FC and proceed to the Grand Final.

And yet, the Victorian team present as a complete outfit complimented with a consistent dedicated captain in Steph Catley and a strong bench including young goalpoacher Beatrice Goad.

Melbourne Victory boast the second best defensive record in the competition and the acquisition of seasoned midfielder Ella Mastrantonio from Perth Glory adds more depth to their spine.

The Victory kryptonite is hard to put your finger on. They are a team who like to control the ball and tempo of the game so pacey opposition with holding midfielders can give them a headache.

In attack, Melbourne tend to favour playing into the penalty area and crowding the penalty box and struggle to utilise their width consistently from both wings (usually persisting down the same side).

Inconsistency towards the finish became costly, Melbourne were still shining in build-up but unable to score from distance and even goalmouth scrambles were not going their way.

Even the ever-reliable tactic of getting the ball to De Vanna or Fishlock to open up the defence was not quite enough to beat W-league teams who had improved fitness and conditioning in the latter half of the season.

With more Matildas’ caps under her belt, Bri Davey will be the key to the Victory pushing through the finals to claim the shiny silverware. Davey’s shot-blocking and commanding presence as well as her vocal control of her backline may be the difference against a side like Sydney FC who like to go down the middle and get 1v1 with the ‘keeper.

If it comes down to a penalty shoot-out (as it did for Victory last season) than expect Davey to be relaxed and confident. Shout-out also to all-round superstar Steph Catley who’s always reliable defending has evolved into a more explosive wingback role this season. 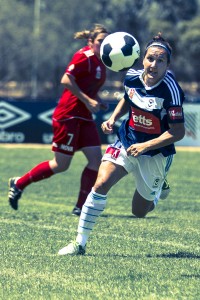 Can’t go past Jess Fishlock as the key midfielder for Victory. Fishlock’s arrival to the team created a shift in their style and her ability to hit from distance as well as play in Lisa De Vanna was a potent recipe for goals and hijinks.

Jess Fishlock demonstrates the skills to decide when to hold the midfield or push up and play the ball in, her experience and talent evident in almost every decision she makes as you can see her mind buzzing for every minute she is on the field.

One of the greatest striker’s that Australia has produced, Lisa De Vanna can play, will play.

A force to be reckoned with – if she is allowed more than one thousandths of a second to advance behind a backline - then you might as well add another goal to her growing tally.

De Vanna’s speed is much lauded but really it is her impeccable finish that separates her from the rest.