If you have been following W-League season 7 from near or far (the North Pole for example), it would be no surprise to hear that it has been a surprisingly inconsistent, up and down affair.

If you have been following W-League season 7 from near or far (the North Pole for example), it would be no surprise to hear that it has been a surprisingly inconsistent, up and down affair. Canberra have been no exception to this blight.

The Green Machine have had big wins against Perth (2-1 in Round 12) and Sydney (3-0 in Round 9), but they have also had big losses, at home no less, with a 4-2 defeat against Melbourne and a 3-2 setback against Adelaide.

These are just a couple of examples of the ebb and flow of the season, where three of the top four mighty finals qualifiers have won just half their games or less.

You could paint this in a beautiful light, suggesting that the competition is more balanced than ever, but perhaps the closer truth is that short pre seasons and seasons make it problematic to find consistent form.

That issue is highlighted in the fact that they have not managed back to back wins since September and to win the championship they will need to win 3 in a row.

What’s in Canberra’s favour? Well they’re a tough team who are known for standing up in the big matches and remaining calm under pressure. Canberra have taken a while to get used to their new formation but now that they have, the players across the board seem to be much more comfortable.

Head to head these teams are amazingly close. Equal in wins (6-6), draws (2-2) and losses (6-6), with Melbourne edging in front only based on goals scored.

Beware the late scoring United army with an impressive 32% of their goals scored in the final 15 minutes!

Now we wonder, just how much did that big match against Perth take out of Canberra’s reserves?

So why does form matter? Well it doesn’t if Canberra brings out their A game like the last round against Perth, but their inconsistency could be a concern and that’s probably their kryptonite.

If Michelle Heyman and Ashleigh Sykes aren’t scoring, Canberra could be toothless in attack.

Another dose of Kryptonite is that Canberra struggle for pace. It feels like almost a crazy thing to say given the speed of Sykes and the straight line runs from Heyman, but their midfield of Lori Lindsey and Caitlin Munoz are at best, not fast. That said, they have the ability to control the pace of the game, slowing it down to their advantage. 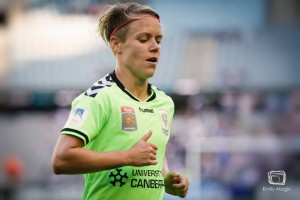 At the back, from Chantel Jones to the young Sally Rojahn, Canberra’s strengths are many. Captain Nicole Begg is a standout along with Ellie Brush. An ankle injury concern for Brush probably won’t stop the courageous defender, but if it does, Kendall Fletcher is equally versatile in the midfield or in the defensive line.

Canberra’s midfield is beautiful to watch, with the soothing ball distribution from Lindsey a notable example. Football players are a mixture of skill, fitness and intelligence and yet with Lindsey the most prominent element, amongst all of these, is her passion and spirit, which is ever present in the team.

This could possibly be Lindsey’s last game of professional football but if she continue to use her skills to the benefit of the Canberra forward line, there could be just one more epitaph in Lindsey’s incredible football journey.

Picking a key forward from the Canberra line up feels like picking a favourite child. Impossible and to some extent, it epitomises the team that Canberra are. They’re a complete team, rather than a team of individuals.

Both Heyman and Sykes are the key strikers in the team at the moment. The pair have been on and off this season, but more recently they have been in form, scoring three goals apiece across the last four matches.

* Catch all the action Live at 3.00pm nationally on ABC TV. Or from Monday on ABC iView with a full replay at 3.30am on Tuesday.

** Listen LIVE on FFV Radio from 2.30pm. Head to http://www.footballfedvic.com.au/news-media/ffv-radio/ or search 'FFV Radio' in the TuneIn smartphone app.