Canberra United heads into the first semi final full of confidence after a well-fought out minor Premiership, and some pretty decent statistics for  W-League's Season 6.

Despite a mid season slight slump of form, the 'Green Machine' has had 9 wins and only recorded 3 losses.

Canberra kicked off the season with a bang thanks to a remarkable 3-0 win against Brisbane Roar, with Michelle Heyman bagging a brace and proving too powerful and fast for the Roar's defence.

The trio taking the competition to another level with a strong show of skill and tempo that set the precedent for their Australian team mates to follow.

This level of master play in the midfield has carried United through the bulk of the season and has played a role in the storming end to the regular season.

Of Canberra's three losses, noteably, two of them verse two other eventual semi-finalists, Brisbane and Melbourne, and one now not so shock loss against a gutsy Adelaide United in the sixth round.

However, it was the two match ups with last year's Champions and the previously undefeated Sydney FC that really cemented Canberra's quality of play.

On both occasions the two sides went head to head in some of the best football played all season with the same daringly close result  of 2-1; Canberra stealing the 3 points each time they encountered.

Not an easy feat, given Sydney's stunning form and offensive dominance throughout the season.

Canberra are one of the best structured teams in the competition with new head coach Liesbeth Migchelsen utilising her strengths all over the park and in every third.

A talented and experienced squad with a great deal of depth to choose from and quality players always at the ready on the bench.

Canberra doesn't have the greatest record against their semi final opponent, Brisbane.

The Roar were the only team to beat Canberra on home turf this season and have had a greater win-loss record in games played thus far between these two quality teams.

On that occasion, Brisbane started the game with a high tempo opening and Canberra never really recovered.  Defensively they found it difficult to break down the Queenslanders and offensively the Roar's front five continually found ways behind the strong Canberra defence.

If Brisbane are firing and are retaining the bulk of possession, Canberra will struggle to find the momentum to build their own offense.

Brisbane's disciplined defense are also well-versed in reading the play and cutting down opposition's strikers charge towards goal.

If Heyman, Ochs and Sykes can't get good service from their midfielders then Brisbane will hold the advantage and press forward.

Ochs has morphed into one of the toughest, strongest and fastest forwards in our W-League .

A handful for all defenders with her striking ability to run at the player, beat them and then cross a ball into the penalty area without losing a whisker of pace, is nothing short of quality.

She has earned the respect of all that have played with and against her, and has not only scored a host of goals for Canberra, but has also assisted in many.

Upon her return to the US, Ochs can decisively say that she has completed her job as a Forward and helped lift the Canberra team to a minor-premiership and a shot at a Season 6 Champions title.

An anchor and a master distributor of one touch football, Lindsey can turn an opposition's mistake into a maze of quick, sharp passes resulting in one of her quick forwards, to break in behind the back line and shoot on goal.

Another great addition Lindsey has coped well with the Australian's summer of sweltering football and acclimatised to her team mates reliance on her central holding position. 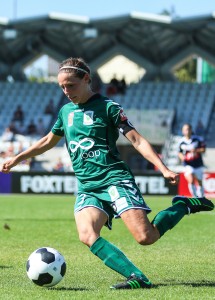 Handy in the penalty area as well, her calm and non-threatening approach often has defenders watching the ball instead of marking her.

Aerial balls are always handled well by Canberra forwards, especially Heyman, though Lindsey has definitely held her own on capitalising on pinpoint crosses by team mate, Ochs.

Sykes was vindicated this season for her consistent work rate and effort by being handed the reigns of captaincy for Canberra United.

Leading by example, the left full back often finds herself up against every opposition's fastest forward on the right flank.

Her speed in chasing down attackers and adaptability in re-positioning herself up and down the wing, is highly notable, and hasn't gone unnoticed by Matildas selectors.

Sykes is a work-horse and has decent enough footwork technique to regularly assist in delivering balls forward to her twin sister, Ashleigh.  Her fitness has her outlasting opposition's strikers who also find themselves mentally beaten by the tenacious Canberra defender.