A late surge showed the best of Newcastle in a disappointing season | (Credit: Getty Images) 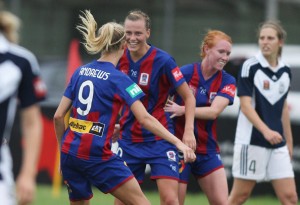 A late surge showed the best of Newcastle in a disappointing season | (Credit: Getty Images)

Newcastle came into the W-League season with a new look squad. Many players came from the local WPL competition with just the one regular Matildas player in Emily Van Egmond as well as a host of former young Matildas and three quality American imports.

Despite Newcastle only registering one win this season the team performed quite well particularly towards the end of the season with two draws in rounds 11 and 12 against teams who were finals bound.

The first was against Perth Glory in Perth, the Glory needed to win to finish the season in top spot. The Jets took the lead early then conceded two goals before a stunning finish from Jasmin Courtenay levelled the scores. Newcastle survived late pressure from Perth to come away with a point.

In the final round against eventual Grand Final hosts Melbourne Victory the Jets went behind 2-0 before levelling the scores with two goals in less than two minutes leading up to half time. They then had to come from behind again in the second half to play out an entertaining 3-3 draw.

Van Egmond is a world class player, her ability to find goal from long range as well as her passing ability and international experience makes her a very valuable asset.

Simon continues to be one of the best Jets | (Credit: Getty Images)

Gema Simon is a quality player who has great touch and speed giving her the ability to make overlapping runs and track back when possession is lost. Simon also has the ability to play a number of positions.

A good quality keeper, Campbell’s first season in the W-League had many highlights. She made some fantastic saves at vital moments to keep her side in the contest. Has the potential to be one of the great keepers in the competition in the years to come.

In a short competition gaining a fast start with wins on the board early on is vital. In some matches for example against Canberra United and Sydney FC, Newcastle seemed to have some moments where they would let in goals in quick succession which cost them.

Newcastle began improving in that area as the season progressed. The Jets also showed great fighting qualities throughout the entire season most notably in Perth where they held the Glory to a 2-2 draw that denied Perth from a top of the table finish.

This squad is full of talent and the vision that has been put in place by Northern NSW Football is a fantastic one. If this squad stays together next season Newcastle can make a real push for the finals. They have some seasoned W-League players who have performed well for Newcastle on a consistent basis.

They also have a lot of good young players who have come through this season including goalkeeper Eliza Campbell who made some great saves against quality opposition. A second last placing was not a true reflection of the talent Newcastle has. There are exciting times ahead for the Newcastle Jets.