For two seasons running, they were given the wooden spoon and yet, they rose from ninth to seventh in Season 10 – a small but welcome improvement in overall standings.

Defensively, goals scored against Victory fell from 28 (the 2016/2017 season) to 19. They did, however, only maintain one clean sheet for the season.

Season 10 started strong: a 2-1 win over the then-league-premiers, Canberra United. It took them another five games to grab another, a dominant 4-0 win over Adelaide United.

Winning the derby against Melbourne City was another season highlight – a mammoth goal from Melina Ayres grabbed the 2-1 lead. However, they had an inconsistent season overall: three wins, seven losses and two draws.

American internationals Christina Gibbons and Kristen McNabb both made a formidable impact, with Gibbons collecting the W-League Victory Medal and the Players’ Player of the Season.

Fan favourite Natasha Dowie secured herself the title of leading goalscorer for the club. Accumulating 17 goals in total during her three seasons at Victory, she netted 6 out of Victory’s 15 goals in Season 10.

Locally, Hopkins has brought over Grace Maher from Canberra United, Emily Gielnik from Brisbane Roar, Teigen Allen from Sydney FC, as well as Ella Mastrantonio, who has played with Victory in years previous.

Victory have not had to look far for their international signings either. Christine Nairn returns, bringing with her Orlando Pride teammate Dani Weatherholt. They are joined by Utah Royals’ defender Samantha Johnson. Nairn’s leadership qualities and her previous time with Johnson and Weatherholt will certainly add cohesion across the pitch.

Two notable departures will be retiring midfielder Gulcan Koca and attacker Laura Spiranovic. Koca holds the record-high number of games played for the club, playing for Victory across an impressive nine seasons. Spiranovic, too, has been a mainstay as an attacker for the past 7 seasons. 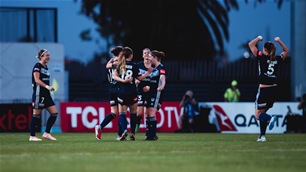