Season 10 marks a new era for the most successful team in W-League history.

Season 10 marks a new era for the most successful team in W-League history.

After securing a third Premier’s Plate in the last week of last season, Canberra United were oh so close to qualifying for another Grand Final but missed out in extra time to the tenacious Melbourne City. Stand in captain Ash Sykes added the Golden Boot to her silverware, and United bid farewell to Rae Dower who steered them to two semi-finals and assisted in the previous two season.

While United had a slow start and showed some inconsistency through Season 9, they had an impressive season overall, highlighted by being the first team to beat Melbourne City in the history of the league, and they continued their scintillating run in the cauldron of McKellar Park. 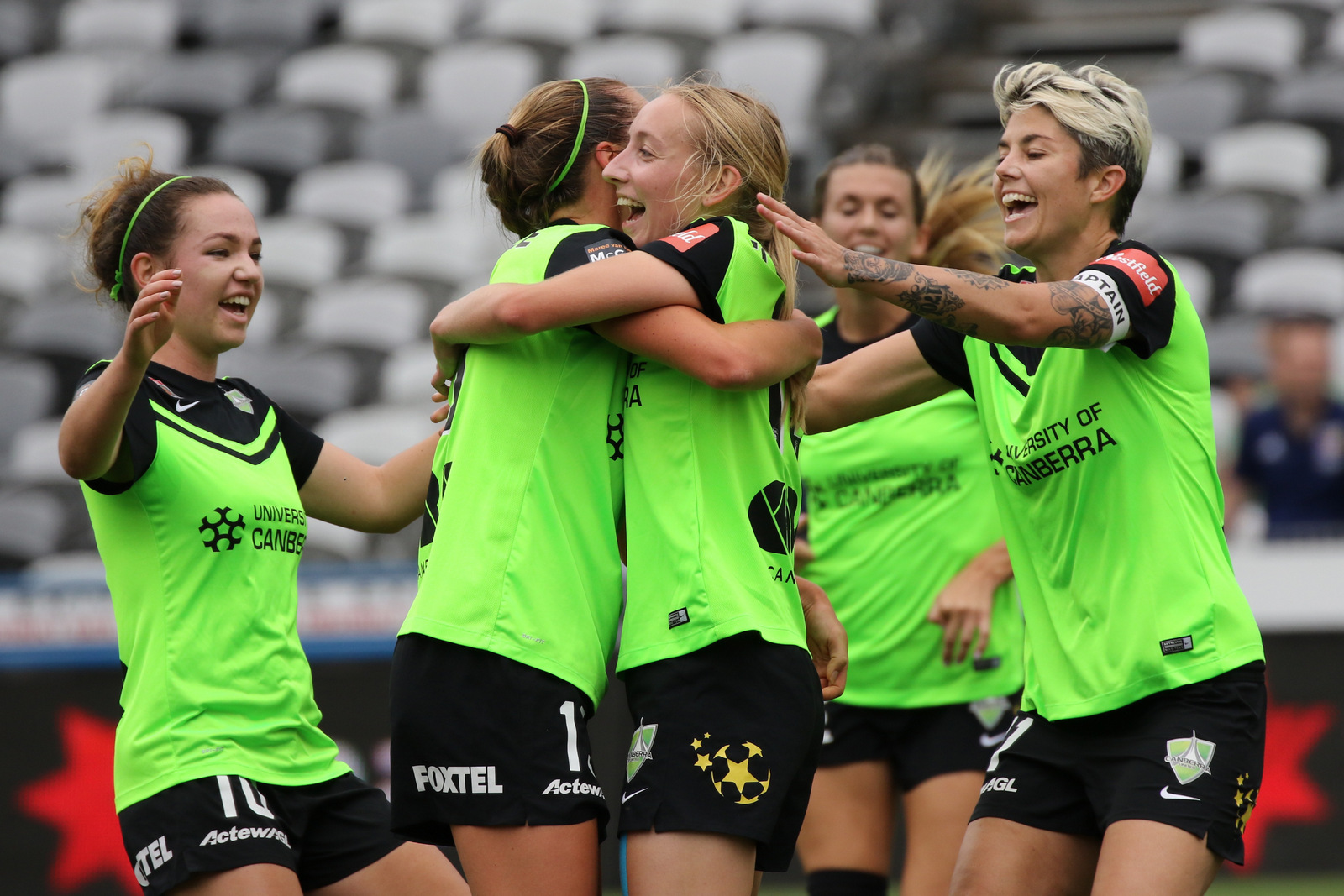 Canberra has typically recruited well, both overseas and locally, while developing a significant talent pool in the ACT. Signings for Season 10 have a similar flavour. It will be Canberra’s biggest changing of the guard, with none of last year’s internationals returning, the bulk of Canberra’s pioneer players moving on, a string of Young Matildas joining the ranks, and some local players rewarded.

The seismic movements include Hayley Raso’s move back to Queensland following her successful year with NWSL Champions Portland Thorns, while United pioneer and former captain Ellie Brush hangs up the green shirt and heads to Western Sydney to pursue her dual football career with the Wanderers and the Giants in the Women’s Australian Football League. Caitlin Munoz, hoping to return after knee surgery in 2016/17 has not been signed to United this year.

Nicki Flannery, Grace Maher, Claire Hunt, Karly Roestbakken and Georgia Boric (GK) return, with some Young Matildas teammates, Bethany Gordon, Georgia Plessas and Ellie Carpenter, who has shifted from Western Sydney Wanderers to bolster the defence. They will be late to join Canberra United given their success in the AFC U19 Championship, seeing them through to the knockout rounds.

One question mark over the team is the midfield, where Grace Maher will need to continue to flourish, but Canberra will miss the silky skills and strategic mind of Yukari Kinga who has signed with Melbourne City.

Camila from Brazil was an inspired recruitment coup for the club, but an ACL injury sustained last month in Orlando forced United management to change tack and signed Toni Pressley, a strong defender from Orlando Pride in the National Women’s Soccer League.

Defence wins championships and Canberra has bought up big with internationals Laura Bassett (English international and former Arsenal and Chelsea player), Haley Kopmeyer (Seattle Reign), and Pressley, to add to the likes of Hunt, who shows great promise as a centre back. 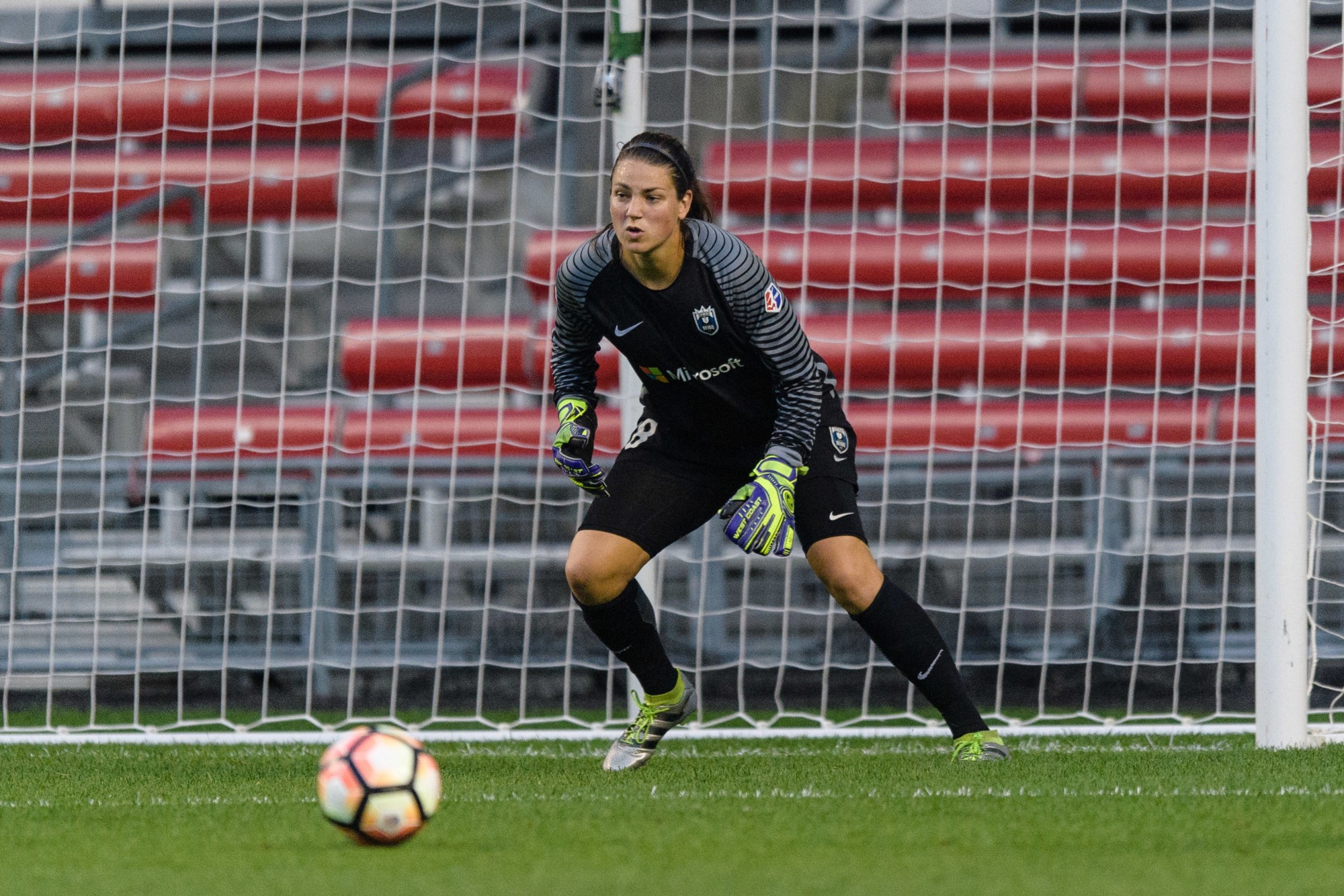 Haley Kopmeyer between the sticks for Seattle (Photo: Seattle Reign)

A Canberra United favourite, Kendall Fletcher (formerly of Seattle Reign), returns to Canberra this season after playing with Sydney University under Heather Garriock in the NSW Premier League.

Continuing on the theme of experience, Garriock has utilised her international contacts to gain the services of Norwegian international Elise Thorsnes.

With over 100 caps for Norway, Thorsnes is a versatile addition to the capital side with the ability to play both defensive roles as an attacking full back or as an out and out attacker. Pivotally, she provides additional leadership to the squad brimming with talented youth.

The off-season also saw some big changes off the field in the capital. Heather Garriock, former Matilda, and current assistant Matildas coach will take the helm of a W-League club for the first time, with two successful seasons at Sydney University in the NSW Premier League behind her and a masters in sports coaching.

Garriock is no stranger to Canberra, having spent many months in the capital in camp as a player and coach at the Australian Institute of Sport, which doubles as the training ground for Canberra United.

In the back room, Dr Heather Reid AM, who has been the General Manager of Canberra United since its inception, has also departed the club this year, leaving a strong legacy of success in her wake. 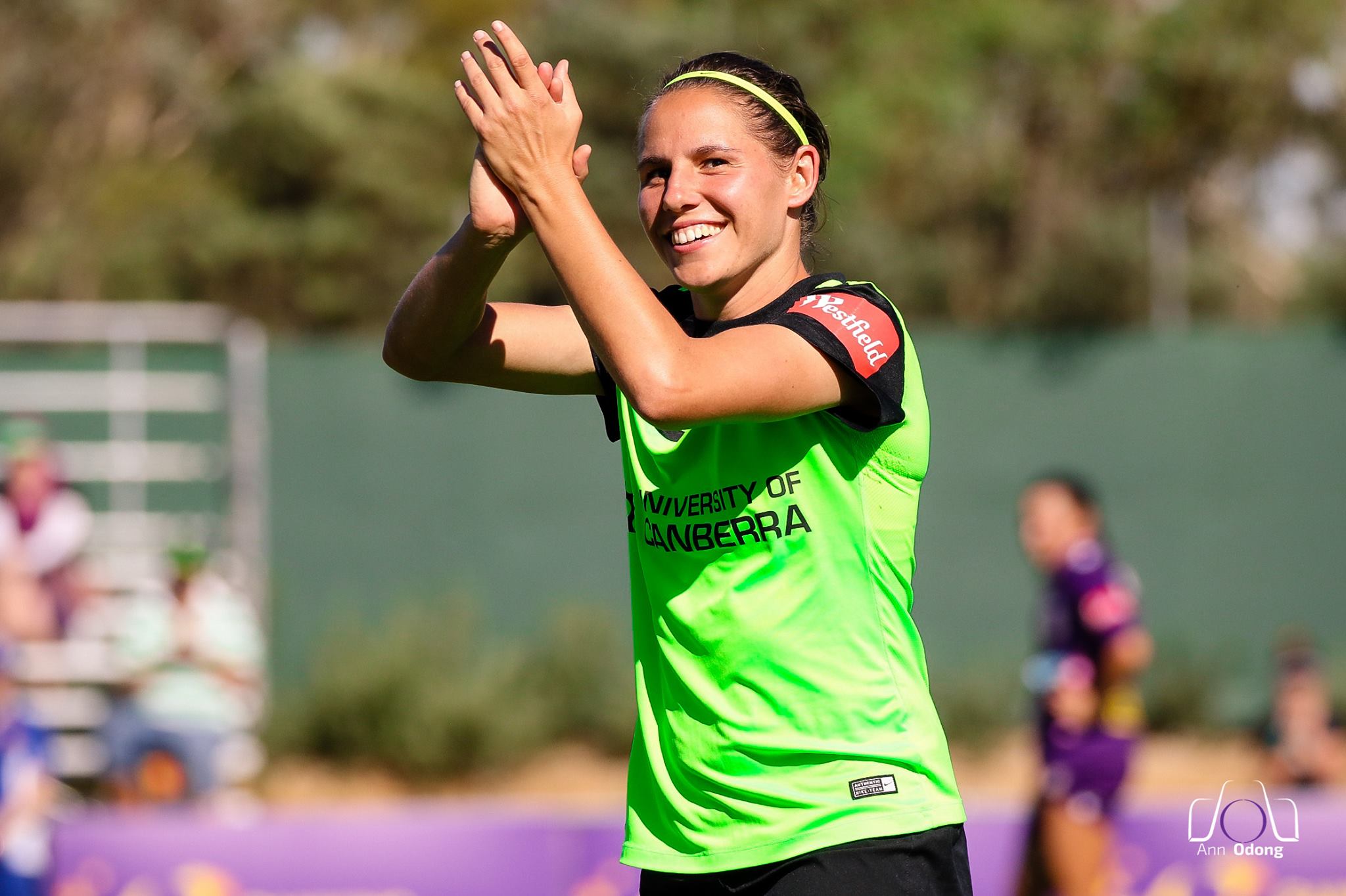 Last season Canberra United's strong attacking performances fuelled their winning of the regular season premiership. Many of the components of that attack are back for Season 10, including W-League Golden Boot winner Ash Sykes back from a successful American stint. The USA saw her play a more defensive role than she is used to, Canberra United will again be expected to fire up top.

A fit Michelle Heyman who re-signed after a season cruelled by injury will help Sykes up front as they re-ignite a partnership that has proved very fruitful in the past seven seasons. Another of the Canberra stalwarts in Caitlin Munoz will also be a welcome return from injury with these experienced heads surrounded by pacy Young Matildas attackers in Amy Sayer and winger Nicki Flannery who enjoyed a breakout Season 9.

One challenge for Canberra United in Season 10 will be the team’s maturity and stability. Last season saw Ash Sykes step in as captain in the absence of Heyman and Brush (both injured) and Nicole Begg (sabbatical). This season, international recruits Haley Kopmeyer (goal keeper, Seattle Reign) and Laura Bassett (England) will add seniority and leadership at the back of the park.

United will need to work well in transition, which will come from the set of national squad players Garriock has recruited, particularly the combinations formed on Young Matildas duty. With an entirely different backline to Season 9 and after many seasons of consistency in this section, Garriock will need to find a way to have them gel with some urgency. Canberra face a strengthened Melbourne Victory and Sydney FC in the first few rounds, so there won’t be much time to find their rhythm. 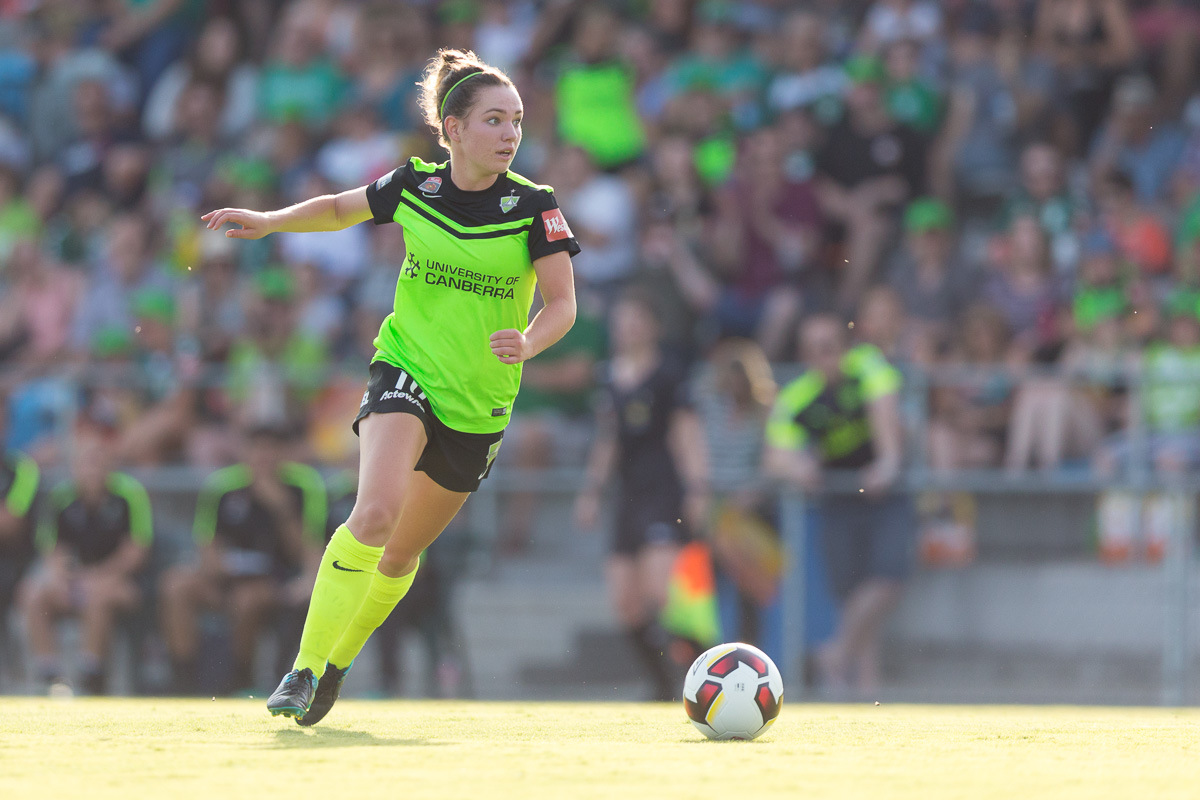 Laura Bassett (Defence): Laura Bassett has played most of her career in England, and will be looking to make a mark in the W-League. She has recent significant EUROs experience, and will be a great addition to Canberra, with Garriock already confident she will be central to the team’s defence.

Grace Maher (Midfield): Grace Maher was impressive in Season 9, and will no doubt come off AFC Under 19s Championship duties with more to prove in Canberra’s centre. Maher will be familiar with linking in Heyman and Sykes up front, and should have a lot of confidence after her break out year last year and her leadership of the Young Matildas this year.

Ashleigh Sykes (Forward): Ash Sykes returned to Australia just a week after winning the NWSL championship with the Portland Thorns. She has developed defensive skills and physical strength having undergone an intensive finals’ series with the Thorns. Last year’s Golden Boot will need to continue to lead from the front for Canberra United to have a shot at the title this season. 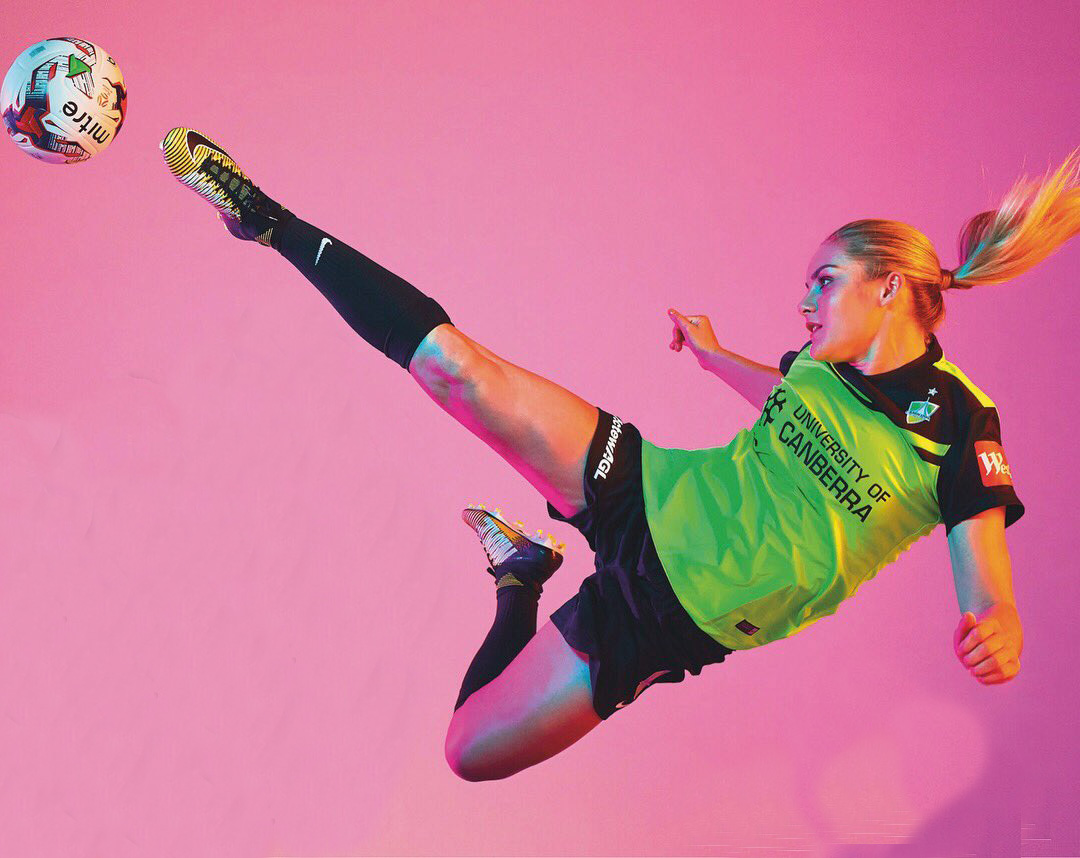 Ellie Carpenter (Defence): Look to Ellie Carpenter to make an impact at her new club. Carpenter stated that she was looking for a new challenge when she signed with Canberra. She has impressed with the Young Matildas and the senior national team in the past 12 months, and will no doubt benefit from working day-in day-out with Garriock and other national team support staff at the Australian Institute of Sport while in Canberra.